The Marylebone Cricket Club (MCC), the custodian of cricket laws, has announced it will review the overthrow incident which took place in the World Cup 2019 final between England and New Zealand."The WCC discussed Law 19.8 in relation to overthrows, in the context of the ICC Men's Cricket World Cup Final. 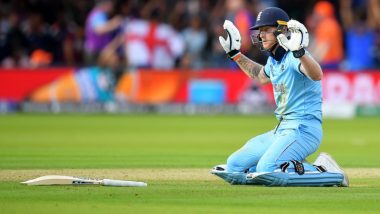 Ben Stokes reacts after England were awarded six runs after an overthrow during the CWC19 final. (Photo Credits: Getty Images)

London, August 13: The Marylebone Cricket Club (MCC), the custodian of cricket laws, has announced it will review the overthrow incident which took place in the World Cup 2019 final between England and New Zealand."The WCC discussed Law 19.8 in relation to overthrows, in the context of the ICC Men's Cricket World Cup Final. The WCC felt that the Law was clear but the matter will be reviewed by the Laws sub-committee in September 2019," said MCC in an official statement. Ben Stokes Asked Umpire to Reverse Decision of Giving 6 Runs Off Deflected Overthrow During World Cup 2019 Final Against New Zealand, Reveals James Anderson.

During the final over in England's chase of 241 on July 14 at Lord's, all-rounder Ben Stokes accidentally knocked the ball coming in from deep midwicket fielder Martin Guptill and deflected it off to the third man boundary, while attempting to dive for his crease with an outstretched bat in a bid to complete his second run. Simon Taufel’s Statement on Umpiring Blunder During CWC 2019 Final Adds Fuel to Fire, Netizens Divided Over England’s Controversial Win Over New Zealand.

After consultation with Marais Erasmus and the rest of his umpiring colleagues, Kumar Dharmasena signaled six runs for the incident, meaning that England who by then seemed to be drifting out of contention needing nine runs from three balls were suddenly right back in the hunt for their World Cup glory needing three more from two.

England were eventually adjudged winners of the World Cup on the basis of their superior boundary count after the the match ended in a tie after regulation play and Super Over. Former international umpire Simon Taufel had said that the umpires made a mistake while awarding six runs to England, instead of five.

Dharmasena, who was targeted for his controversial overthrow call, had accepted his mistake but said he didn't regret the decision. ICC had also backed the Sri Lankan umpire over the issue. The MCC World Cricket Committee, chaired by former England batsman Mike Gatting, met at Lord's on August 11 and 12.

The MCC law 19.8 pertaining to overthrows states: "If the boundary results from an overthrow or from the wilful act of a fielder, the runs scored shall be any runs for penalties awarded to either side, and the allowance for the boundary, and the runs completed by the batsmen, together with the run in progress if they had already crossed at the instant of the throw or act."

(The above story first appeared on LatestLY on Aug 13, 2019 10:41 AM IST. For more news and updates on politics, world, sports, entertainment and lifestyle, log on to our website latestly.com).