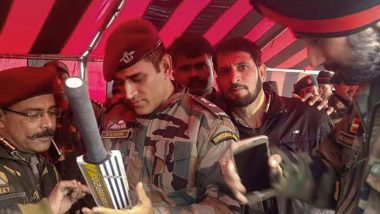 Former Indian cricket team captain MS Dhoni reached the Kashmir Vally on July 31 to join Indian Army for his two-week stint. Dhoni will be in Kashmir till August 15 and will serve his paramilitary regiments. The Indian wicket-keeper batsman will stay with his 106 TA Battalion (Para) and will perform duties assigned to him. Meanwhile, Dhoni’s first picture in Army uniform has apparently gone viral. MS Dhoni Departs for Srinagar to Join 106 Territorial Army Battalion, the Indian Cricketer Spotted at Delhi's IGI Airport (See Photo).

The photo is all over social media and Dhoni can be seen signing a cricket bat as he is surrounded by Army. The unit in which Dhoni will serve is deployed in south Kashmir region. For the uninitiated, Dhoni was accorded the honorary rank of Lieutenant Colonel in 2011. The 38-year-old is a qualified paratrooper as he has completed five parachute training jumps. MS Dhoni Delivers a Speech in Chennai Ahead of Joining in His Regiment in Kashmir (Watch Video).

Dhoni opted not to tour the West Indies and instead serve the Army. The Indian cricket team is on West Indies tour currently and will play a full-fledged series there. The tour kicks-off with three-match T20Is followed by three One-Day Internationals (ODIs) and two-match Test series.

Following the ICC Cricket World Cup 2019, it was speculated that Dhoni will retire from the cricket. However, the World Cup-winning captain has decided to take a two-month sabbatical leave from cricket.

(The above story first appeared on LatestLY on Aug 01, 2019 04:48 PM IST. For more news and updates on politics, world, sports, entertainment and lifestyle, log on to our website latestly.com).