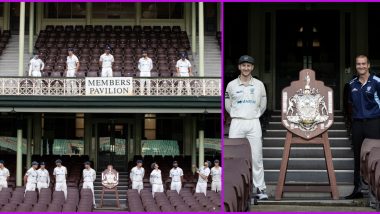 “The New South Wales Blues practice social distancing as they pose for their Sheffield Shield winning team photo at Sydney Cricket Ground today. NSW won the 2020 Sheffield Shield after the season was cancelled due to Covid-19,” the photographer wrote.

Check Out the Photos

A historic photo to mark our 47th Shield title!

This season’s title was 47th for the New South Wales and their first since 2013/14. Nic Maddinson of Victoria Emerged as the highest run-scorer of the season with 780 runs from seven matches while Queensland’s Cameron Gannon was the highest wicket-taker with 38 wickets form eight matches.

(The above story first appeared on LatestLY on Jul 10, 2020 02:30 PM IST. For more news and updates on politics, world, sports, entertainment and lifestyle, log on to our website latestly.com).