Martin Guptill and Colin Munro became the second pair to be removed for a first-ball duck. It was only the second time in World Cups history that the incident occurred and interestingly both these incidents have occurred in the last two editions of the World Cup. 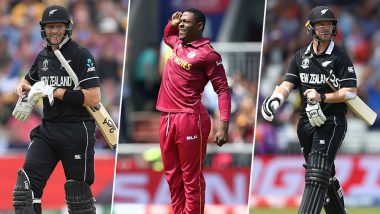 New Zealand opening batsmen Martin Guptill and Colin Munro registered an unwanted record after they were both dismissed in the opening over by West Indies bowler Sheldon Cottrell during the WI vs NZ clash in match no 29 of ICC Cricket World Cup 2019. It was only the second time in World Cups history that both the openers were removed for a first-ball duck and interestingly both these incidents have occurred in the last two editions of the World Cup. West Indies vs New Zealand Live Cricket Score of ICC World Cup 2019 ODI Match.

West Indies captain Jason Holder won the toss and elected to field first inviting the Kane Williamson led New Zealand to bat first. The Black Caps were coming off a spirited victory against South Africa in their previous match. But left-handed fast bowler Cottrell had other plans. The 29-year-old first castled Guptill plumb in front of the wicket with his first delivery before cleaning-up Munro with his penultimate delivery of the over.   New Zealand vs West Indies Live Cricket Score 29th ODI Match.

While Guptill was caught with searing Yorker that swung into him, Munro was clean-bowled with another Yorker on the off-stump. Cottrell celebrated with his trademark salute after creating the record. He became the first bowler to dismiss two batsmen in the opening over of a match in CWC 2019.

This was also only the second time such a thing happened in World Cups. The last time this happened was in 2015 when the World Cup was played in Australia and New Zealand. The incident occurred in the match between in the Pool A game between Sri Lanka and Afghanistan. Lahiru Thirimanne, who is opening for Sri Lanka in CWC19, and Tillakaratne Dilshan were the victims.

Like Guptill, Thirimanne was also dismissed the first ball by Dawlat Zadran in the opening over of the Sri Lanka innings. Interestingly, the left-handed batsman was also caught plumb in front of the wicket from a full-length delivery. Dilshan was then removed by Shapoor Zadran after nicking the first ball he faced to wicket-keeper Afsar Zazai. But despite the early collapse, Sri Lanka went on to win the match by four wickets.

It was also the second instance in the history of cricket when both openers were dismissed for a first ball duck in the same over and the third time when they were out for a first golden duck. The first time such an incident occurred was in 2006 during Zimbabwe’s tour of West Indies. Zimbabwean openers Harry Peter Rinke and Terrence Duffin were removed by West Indies fast bowler Fidel Edwards.

Bowling the first over of the Zimbabwean innings, Edwards clean bowled Rinke in his first delivery before having Duffin caught by wicket-keeper Dinesh Ramdin in his fourth delivery of the over. Edwards went on to claim a three-wicket haul in the match as West Indies romped to 82 runs victory after posting 33 runs on board having opted to bat first.

Guptill and Munro’s dismissal was, however, the first instance when two opening batsmen were removed for a first-ball duck in the opening over of the game. Despite the early blows, New Zealand recovered with Kane Williamson hitting his second consecutive century of CWC 2019 to help his side post a respectable target on board.

(The above story first appeared on LatestLY on Jun 22, 2019 09:58 PM IST. For more news and updates on politics, world, sports, entertainment and lifestyle, log on to our website latestly.com).