No Pakistan Cricketers in IPL! Shahid Afridi Feels Babar Azam & Other Players Missing Out on the Big Opportunity 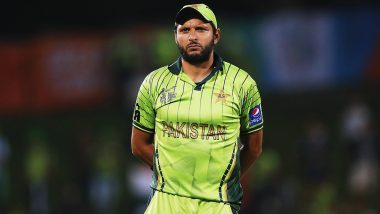 For years now, the Pakistani players have not been featuring in the IPL and Shahid Afridi has repeatedly gone on record saying that the players from their country should be given an opportunity to play in the mega-event. Now during an interview, the former Pakistani player had said that many talented cricketers like Babar Azam and others are missing out on an opportunity in the cash-rich league like the IPL. During the course of the interview, he also said that the bilateral series between the two countries will not resume until Prime Minister Narendra Modi is in power. Shahid Afridi Continues to Blame IPL for Sri Lankan Players' Drop-Out from Their Home Series.

The first edition of IPL 2008 had Pakistan players like Shoaib Akhtar, Sohail Tanvir and others playing for the franchises, but after the 26/11 attack, the Pakistani players have been banned from participating in the tournament. He also spoke about the bilateral ties between the two countries. Afridi explained, "With Modi in power, I don’t see it’s going to happen." India and Pakistan played their bilateral Test series in 2012.

(The above story first appeared on LatestLY on Sep 26, 2020 10:52 PM IST. For more news and updates on politics, world, sports, entertainment and lifestyle, log on to our website latestly.com).