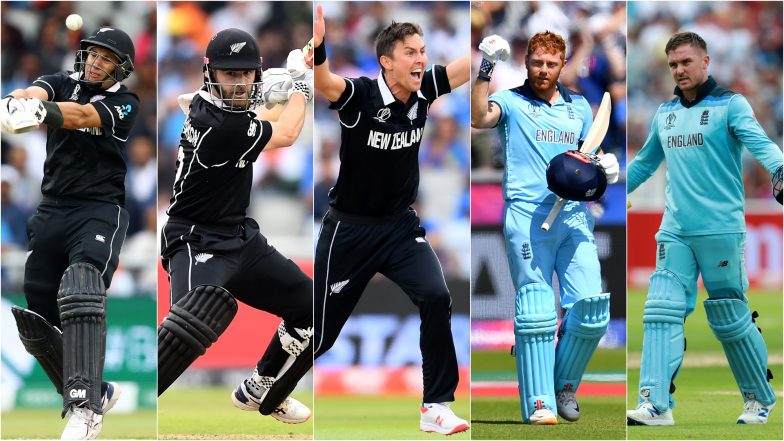 New Zealand are playing in their second successive final of a World Cup tournament while it’s a first for England since 1992. Having never won a title in their history, the ICC Cricket World Cup 2019 brings a wonderful opportunity for the two teams to put an end to their long drought. The hosts at one stage looked certain to crash out of the event after successive defeats at the hands of Sri Lanka and Australia. But the squad is now back to its usual best, defeating sides with ease. The Black Caps are fighters who give their all right till the end which sets up for a fascinating final. A look at the players to watch out for in the contest. New Zealand vs England Cricket Score Final ODI Match in ICC Cricket World Cup, 2019.

The backbone of Kiwi batting, Kane Williamson has to score big if New Zealand are to put a decent run on the scoreboard. He has the mindset and the technical superiority to play out the English pacers particularly Jofra Archer who can be very lethal. In terms of his leadership, he is certainly one of the best in the business. NZ vs ENG Head-to-Head Record: Ahead of ICC CWC 2019 Final Clash, Here Are Match Results of Last 5 New Zealand vs England Encounters!

The veteran middle-order batsman has a crucial role to play with the Kiwi openers struggling for form. He has found himself batting in the first fifteen overs on several occasions which often curbs his natural attacking game. If the openers can build a platform for Taylor to come and start swinging from ball one, England could be in trouble. New Zealand vs England World Cup Head-to-Head: Ahead of ICC CWC 2019 Final Here’s a Look Back at Previous NZ vs ENG WC Clashes.

Jonny Bairstow scored a century against the Kiwis in a must-win game towards the end of the group stage. The English opener is in fine form and loves playing against New Zealand in particular if his recent form is anything to go by. If he gets going in the powerplays, he can run away with the game pretty quickly.

It is no coincidence that England have seen a change in fortune ever since Jason Roy walked into the team overcoming an injury. The naturally aggressive opener just tears apart the opposition bowling and sets up the perfect platform for the middle order to launch an all-out assault.

With English batsmen known for their rampage, fast bowler Trent Boult has his work cut out. He has been exceptional for New Zealand both with the new ball and towards the death. The game plan for New Zealand will be to get the English openers quickly with Trent Boult leading the charge.

Apart from these players, they are plenty of others who have the opportunity to become the ultimate heroes for their country in what certainly is the biggest game of their career.