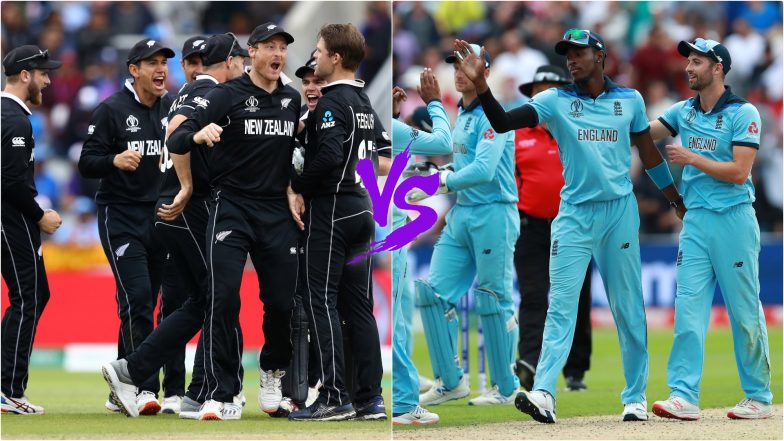 England and New Zealand are all set to play the biggest game in cricket at Lord’s as one of the teams will lift its maiden World Cup title. When the semi-final line up of the ICC Cricket World Cup 2019 was released, not many had given the two teams a chance to make the finals. But after wonderful wins over India and Australia, the sides will battle it out in the home of cricket. The Black Caps have been troubled by their batting off late but their will to fight with the bowl makes them a daunting opposition. For the home side, it is a case of going from strength to strength and they will be confident of getting the job done. If we take a look at the head to head record, in 90 ODI games – England have won 41, New Zealand 43, 2 Ties and 4 games produced no result. A look back at their last five games. New Zealand vs England Cricket Score Final ODI Match in ICC Cricket World Cup, 2019.

A must-win game for the Englishmen and they certainly played like their lives depended on it. A classy century from Jonny Bairstow and a fifty from Jason Roy set England on their way to a huge total. They should have got more but some fine Kiwi bowling in the death saw them restricted to 305. In the Kiwi reply, Kane Williamson and Ross Taylor were both run-out which led to the side losing by 119 runs.

Chris Woakes and Abdul Rashid picked up six wickets between them to stifle the Kiwi batting who could only manage 223 on board. In the second innings, Jonny Bairstow’ century set England on their way who chased down the target in 32.4 overs with 7 wickets in the shade.

Ross Taylor’s career-best score of 181 which included 17 fours and 6 mighty sixes helped New Zealand chase down a mammoth target of 336. Earlier, centuries from Jonny Bairstow and Joe Root helped the visitors get past 300 in their innings. It was a bad day for the bowlers who were hit for plenty throughout the game. Most Runs in CWC 2019: Kane Williamson, Joe Root Need Tons in NZ Vs ENG Final to Surpass Rohit Sharma As Leading Run-Scorer of 12th Edition.

On a slow wicket in Wellington, Kiwi spinner Ish Sodhi was right on top of his game as his 3 wickets was a catalyst in England getting bowled out for 234. Despite Kane Williamson scoring a century in the New Zealand innings, they fell short by 4 runs. Moeen Ali was the leading wicket-taker for the visitors with three to his name.

The English bowlers had a good day at work once again as they restricted New Zealand to 223 in their quota of fifty overs. In response, the sixties from skipper Eoin Morgan and Ben Stokes set up an easy six-wicket win for England.

New Zealand have struggled against England in the last few ODI but the former cannot be taken lightly as India found out in the semis.