After weeks of speculation, Pakistan are set to take on the West Indies in the first of the three-match One-day International series at the Multan Cricket Stadium here later on Wednesday, with crucial ICC Cricket World Cup Super League (CWCSL) points up for grabs. 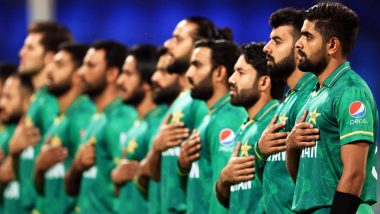 Multan, June 8 : After weeks of speculation, Pakistan are set to take on the West Indies in the first of the three-match One-day International series at the Multan Cricket Stadium here later on Wednesday, with crucial ICC Cricket World Cup Super League (CWCSL) points up for grabs. This will be after a gap of more than 14 years that international cricket is returning to the venue with Bangladesh having played here in April 2008. The series was initially scheduled to be played in Rawalpindi but was moved to Multan at the last minute. SL vs AUS, 1st T20I 2022: Josh Hazlewood, David Warner and Aaron Finch Lead Australia to Convincing 10-Wicket Win Over Sri Lanka.

The series against the West Indies was rescheduled from December 2021, due to a Covid-19 outbreak in the Caribbean side, to June this year. West Indies are returning from the Netherlands, where they swept a three-match ODI series 3-0. Currently, they are sitting in fourth spot on the CWCSL standings with 80 points from 18 games, while Pakistan are 10th with 60 points from 12 ODIs. Pakistan will go into the series with a positive mind-set, having won their last ODI contest, against Australia, by a 2-1 margin at home in March-April. The side will be bolstered by the return of Shadab Khan, who missed that series due to an injury.

Imam-ul-Haq (298 runs) and Babar Azam (276 runs) were the top run-getters, averaging 149 and 138 respectively. Meanwhile, their pacers were impressive with the ball, an attack that was led by Shaheen Shah Afridi. In the West Indies camp, Nicholas Pooran's side saw some strong performances from their top three batters against Netherlands. Shai Hope, Shamarh Brooks and Kyle Mayers struck centuries while Brandon King made an important 91. Their bowlers combined collectively throughout the series, according to International Cricket Council (ICC).

However, Pooran, who recorded scores of 7, 10 and 7 in the three ODIs will look for a strong comeback against Babar's side. One of the biggest challenges for both teams will be dealing with the heat. Temperatures are expected to hover around the high 40s, hence all matches will begin at 4 pm local time to tackle the stifling conditions. The last time the two teams met in a bilateral affair for 50-over internationals was in September 2016 when Pakistan hosted West Indies in the UAE for a three-match series. Pakistan were dominant as they put up big targets in excess of 300 twice and 285 in the first ODI. IND vs SA Preview: Likely Playing XIs, Key Battles, Head to Head and Other Things You Need To Know About India vs South Africa 1st T20I 2022.

Babar emerged as the breakout star and was adjudged Player of the Series for registering sensational scores of 120 (his first ODI century), 123 and 117 in three matches. He became the third Pakistan batter to score three consecutive centuries in men's ODIs and eighth overall. "This is an important series for us as it holds important Super League points. The players have been putting in a lot of effort to prepare themselves for the West Indies challenge and we are eager to win another series and bag maximum points to consolidate our chances for direct qualification in the 2023 World Cup," said Babar Azam ahead of the match. West Indies head coach Phil Simmons added, "The heat is going to be extreme, (but) Pakistan are playing in the heat, too, so it's going to be an even contest when we start the day. How we deal with it before, during and after is going to help us a lot."

(The above story first appeared on LatestLY on Jun 08, 2022 11:47 AM IST. For more news and updates on politics, world, sports, entertainment and lifestyle, log on to our website latestly.com).