Bradburn, who played seven Tests and 11 ODIs for the Kiwis between 1990 and 2001, is presently the fielding coach of the Pakistan men's national team, a role he took in September 2018 following a successful coaching stint with the Scotland men's national cricket team. 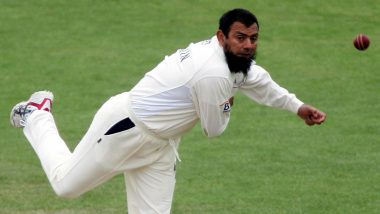 Lahore, May 28: The Pakistan Cricket Board (PCB) on Thursday announced the appointments of former New Zealand cricketer Grant Bradburn as Head of High Performance Coaching and former Pakistan spinner Saqlain Mushtaq as Head of International Player Development as part of the prestigious High Performance Centres restructuring.

In addition to the two former Test cricketers, LUMS graduate Asser Malik, who has a wide-ranging experience with various multi-national companies, has been confirmed as High Performance Operations Manager. Shoaib Akhtar Hails Rahul Dravid’s Defence, Picks Him As India’s Most Decorated Batsman.

"The restructuring is aimed at providing a clear pathway to the young and aspiring player support personnel and players within the game," the PCB statement said.

"The three appointments have been made following a robust recruitment process that included presentations by the candidates, followed by interviews conducted by a high-powered panel that also included members of the PCB Cricket Committee."

Bradburn, who played seven Tests and 11 ODIs for the Kiwis between 1990 and 2001, is presently the fielding coach of the Pakistan men's national team, a role he took in September 2018 following a successful coaching stint with the Scotland men's national cricket team.

"I am honoured that my association and relationship with Pakistan cricket continues. I consider it a privilege to work here in Pakistan among highly skilled players and coaches, while I have realised there is incredible talent and passion for the game in this country," Bradburn was quoted as saying in the statement.

Saqlain, meanwhile, played international cricket between 1995 and 2004 and will be responsible for identifying, developing and preparing players so that they could go on to become world-class cricketers.

"It is an honour and a privilege to represent Pakistan. In this background, I am delighted to have been offered this exciting opportunity to work on skilful and exciting young cricketers and help them grow in their careers," Saqlain was quoted as saying in the statement.

"I have previously worked with a diverse group of cricketers and helped them improve their cricket. I am confident I will be able to translate all my knowledge and experience in the High Performance Centre and help the PCB raise the bar and set new benchmarks.

PCB chief executive Wasim Khan said their ultimate goal is for Pakistan to reclaim the top spot in world ranking and these appointments will help in getting them closer to their goals. Sachin Tendulkar Closed His Eyes While Facing Shoaib Akhtar’s Bouncers: Mohammad Asif Recalls India vs Pakistan Karachi Test in 2006.

"The High Performance Centre is the heart of Pakistan cricket, which will ultimately set the direction of Pakistan cricket's future. The unique skills and understanding that each of these individuals have of their specific areas will help create alignment to international standards and best practices," Khan was quoted as saying in the statement.

"The PCB's objective is to help the men's national team reclaim their top rankings and we will leave no stone unturned in creating opportunities and providing tools to the players to achieve these targets."

(The above story first appeared on LatestLY on May 28, 2020 01:50 PM IST. For more news and updates on politics, world, sports, entertainment and lifestyle, log on to our website latestly.com).