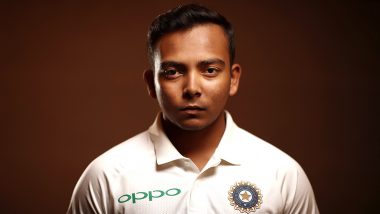 Indian cricket team's young batsman Prithvi Shaw reportedly helped villagers of Dhokawade after their houses were damaged due to recent cyclone Nisarga. As per a report in Mid-Day, the 20-year-old not only helped villagers to rebuild their homes but provided financial assistance to needy villagers as well. Shaw is in Dhokawade village since the lockdown began and is staying at politician Sanjay Potnis' farmhouse. "Yes, they [Shaw and Yash] have been in Alibaug since the lockdown. The cyclone was pretty bad there. The entire village [Dhokawade] was badly affected. The roofs of houses were destroyed. Even my bungalow suffered some damage." Potnis was quoted as saying by Mid-Day. Virender Sehwag Salutes Martyr Kundan Kumar’s Father For Pledging To Send His Grandsons to Indian Army.

"Prithvi and my son witnessed the difficulties of the villagers and decided to help. Prithvi has not only helped them put the roofs back on their houses, he also provided financial assistance to some of the needy villagers," he added. Virender Sehwag, Yuvraj Singh, Shikhar Dhawan Mourn Loss of Martyred Soldiers In Face-Off With China at Galwan Valley.

Apart from being badly hit by Coronavirus, Maharashtra suffered due to cyclone Nisarga as well. Meanwhile, the report further added that Shaw is working on his fitness at the farmhouse. The right-handed batsman was part of India's squad during the New Zealand tour, which took place before cricket matches were suspended due to coronavirus outbreak.

(The above story first appeared on LatestLY on Jun 18, 2020 11:21 AM IST. For more news and updates on politics, world, sports, entertainment and lifestyle, log on to our website latestly.com).