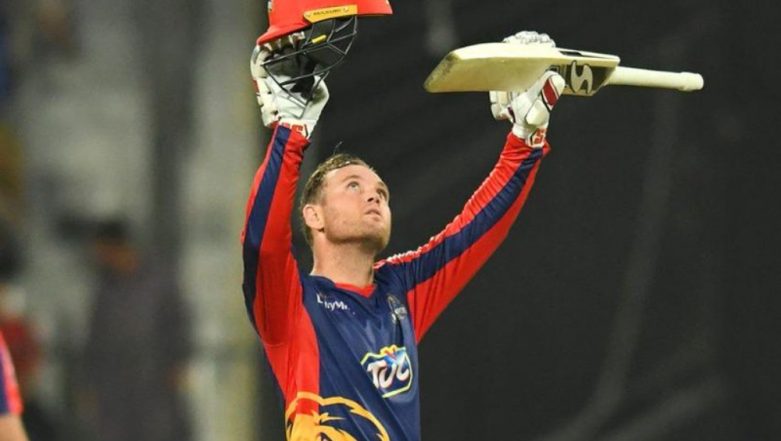 Karachi Kings’ Colin Ingram became the first overseas batsman to register a century in Pakistan Super League. The South African batsman scored unbeaten 127 off just 59 balls against Quetta Gladiators at the Sharjah cricket Stadium as he helped Karachi Kings chase down 187 runs with six balls and as many wickets to spare. Meanwhile, Ingram’s 127 was the first century of this season- PSL 2019. PSL 2019 Points Table: Check Out Updated Pakistan Super League 4 Team Standings and Match Results.

Ingram now becomes only third batsman to score a hundred in PSL’s history. Before him Sharjeel Khan and Kamran Akmal have achieved the feat. Akmal is the only batsman to score two hundreds in PSL, he is also the leading run-scorer in the league.

Meanwhile, Karachi Kings registered their second win of the season. Interestingly, it was Quetta Gladiators first defeat of the season. Chasing 187, Karachi Kings got off to a worst possible start after losing two wickets for just four runs. Ingram then added 50-run stand with Awais Zia for the third wicket and brought some stability. PSL 2019 Most Runs: List of Leading Run-Scorer, Green Cap, in Pakistan Super League 4.

WATCH: @CAIngram41 played an innings to remember, much to the delight of @thePSLt20 crowd as @KarachiKingsARY defeated @TeamQuetta in Sharjah

Gladiators struck back to dismiss Zia and left Kings tottering at 54 for three. Liam Livingstone then joined Ingram and the duo shared 91 runs for the fourth wicket. The majority of contribution during this partnership came from Ingram’s bat. Livingstone was removed in 16th over and then Ingram shared 43-run stand with Ben Dunk. Ingram once again contributed heavily in a partnership. PSL 2019 Schedule in PDF: Download Full Timetable With Fixtures, Team, Venue, Match Timings in IST and PKT of Pakistan Super League 4.

The left-hander smashed 12 fours and eight sixes to guide his side to an impressive win. Ingram, meanwhile, is third on the list of most runs in PSL 2019 with 179 runs. The list is dominated by Quetta Gladiators’ Umar Akmal with 200 runs.