Having secured three consecutive wins, Lahore Qalandars are expected to extend their winning streak in this game as well. However, Quetta can pack a punch and Sarfaraz Ahmed would want his team to step up and put together a match-winning show. 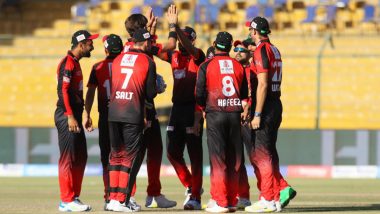 Quetta Gladiators would face Lahore Qalandars in a Pakistan Super League 2022 match on Monday, February 7. The match would be played at the National Stadium in Karachi and is scheduled to get underway at 8:00 pm IST (Indian Standard Time). Shaheen Shah Afridi's Lahore side have notched up three wins on the trot now and are looking to be in good form after a defeat in their first game. The story is quite the opposite in case of Sarfaraz Ahmed's Quetta Gladiators. The Men in Purple have lost three out of four matches played and are sitting fifth on the points table with just two points. Karachi Kings, who lost five consecutive matches in a row, find themselves at rock bottom. PSL 2022: Rashid Khan Tags Himself and Teammates Haris Rauf, Shaheen Shah Afridi As ‘3 Idiots’ in Hilarious Picture

Based on form, Lahore Qalandars are favourites to win this contest. Their bowling attack, led by left-arm paceman Afridi, Haris Rauf and spinner Rashid Khan is a deadly attack for any batting order. For Quetta, the absence of Shahid Afridi due to COVID-19 has been a big blow and they would be hoping to bring about a change in their fortunes in this clash with him being back. Let us take a look at the live streaming details of this game.

The Quetta Gladiators vs Lahore Qalandars match will be played at the National Stadium in Karachi. The game is scheduled to be held on February 07, 2022 (Monday) and will begin at 08:00 pm IST (Indian Standard Time).

Fans in India can watch the live telecast of the Quetta Gladiators vs Lahore Qalandars clash on Sony Sports channels. Sony Pictures Sports Network are the official broadcasters of Pakistan Super League 2022 in India. So fans need to tune into Sony Sports channels to watch the match live on their television sets.

(The above story first appeared on LatestLY on Feb 07, 2022 05:04 PM IST. For more news and updates on politics, world, sports, entertainment and lifestyle, log on to our website latestly.com).