Gujarat Titans' charismatic player Rashid Khan has revealed through a video how he has managed to perfected the 'snake shot', which helped the Hardik Pandya-led team on several occasions in their IPL 2022 title-winning campaign. 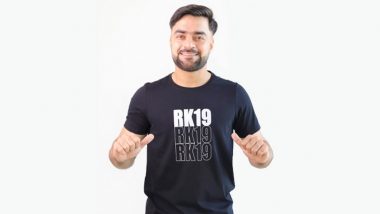 Mumbai, June 4: Gujarat Titans' charismatic player Rashid Khan has revealed through a video how he has managed to perfected the 'snake shot', which helped the Hardik Pandya-led team on several occasions in their IPL 2022 title-winning campaign. The 23-year-old Afghanistan spinner has posted a short video of him holding a golf club and replicating the shot, which has a hint of Mahendra Singh Dhoni's helicopter and a bit of a hockey player's drag-flick. The video has since received thousands of likes. Greg Barclay, ICC Head, Paints Grim Picture of Test Cricket, Says They’ll Get Fewer in Years To Come.

Along with the video, Rashid tweeted, "The helicopter has landed in (flag of UAE). Was that a hole in one?" indicating that the cricketer had flown to the Emirates following the Titans' IPL title triumph in Ahmedabad. Midway through the IPL 2022 season, criticism had mounted over Rashid's inability to provide the breakthroughs with his bowling. The Afghan cricketer had vehemently denied he was losing touch with the ball, and instead said he was perfecting the 'snake shot'. Moeen Ali, England and CSK Star, Gets OBE; Says Open To Come Out of Test Retirement.

The 23-year-old played match-winning knocks for Gujarat against CSK (40 off 21) and SRH (31 not out off 11) under tremendous pressure. Despite contributing handsomely with the bat, the premier leg-spinner was getting criticism for his bowling as he had picked only eight wickets in eight matches. Rashid had then defended himself by saying that while his primary role was that of a bowler, he was upgrading his batting skill for the last 2-3 years, especially as a finisher much like Mahendra Singh Dhoni, to lend solidity to his franchise down the order.

The 🚁 has landed in 🇦🇪

"From the last two-three years I've been working on my batting. I have that self-belief that I should be there and finishing for the team," Rashid had said after his blitz with the bat against SRH at the Wankhede on April 27, which Gujarat won by five wickets in a thriller. "I have those skills and talent but it was just about the confidence in myself; that I could finish. The best thing is I get more opportunity here in this team to bat."

Facing his former franchise, Rashid showed how devastating his batting could be, slamming an unbeaten 31 off just 11 balls as Gujarat completed an improbable chase of 195 to halt SRH's winning streak. There was a hint of MS Dhoni's helicopter, and a bit of a hockey player's drag-flick, but the end product was all Rashid. "The snake shot" is what he called it, because of the way the wrists uncoil and strike.

(The above story first appeared on LatestLY on Jun 04, 2022 01:56 PM IST. For more news and updates on politics, world, sports, entertainment and lifestyle, log on to our website latestly.com).