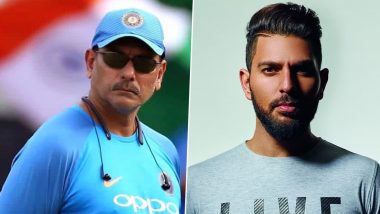 World Cup anniversaries, Yuvraj and India head coach Ravi Shastri certainly enjoy a great connection. Two months after being trolled by Yuvraj for his twitter post congratulating the 2011 Indian cricket team on the ninth anniversary of their World Cup win, Ravi Shastri finally saw an opportunity to give the former all-rounder a taste of his own medicine. Shastri, on Thursday, took a dig at Yuvraj for not tagging him and captain Kapil Dev in his congratulatory post on the 37th anniversary of India’s maiden World Cup title. 1983 Cricket World Cup: Suresh Raina, Mohammad Kaif and Other Indian Cricketer’s Remember Iconic Win on 37th Anniversary.

With his dig at Yuvraj, Shastri also once again brought out the ‘senior-junior’ banter on Twitter which was first started by Yuvi himself. It was on this day, exactly 37 years ago when India led by Kapil Dev beat the mighty West Indies to lift the country’s maiden cricket World Cup trophy. India’s 1983 Cricket World Cup Win: 12 Trivia Facts About India vs West Indies Final.

The nation remembered their heroics and congratulated each member of that team to mark the occasion. Yuvraj also joined the party and sent out a congratulatory tweet calling the victory ‘a moment of national pride’.  India’s 1983 World Cup Winning XI: Know What Members of Country’s First Cricket Champion Squad is Doing Today.

A moment of national pride, our seniors lifted the 1983 Cricket World Cup on this day 🇮🇳 🏆 Congratulations to every member of the 1983 team 👏🏻👏🏻 You set the benchmark for us to achieve the same in 2011! Looking forward to India becoming a world champion in all sports 👍🏻👊🏻

“A moment of national pride, our seniors lifted the 1983 Cricket World Cup on this day,” said Yuvraj in his tweet. “Congratulations to every member of the 1983 team. You set the benchmark for us to achieve the same in 2011. Look forward to India becoming a world champion in all sports.” While the post won many plaudits, Shastri was not going let Yuvi off for not tagging any members of that victorious team in his tweet.

Thanks, Junior! You can tag me and Kaps also 😂 - @therealkapildev https://t.co/EZqRbzYTT7

“Thanks, junior! You can tag me and Kaps also. #therealkapildev,” the current India head coach commented on the post drawing a series of hilarious reaction on Twitter from fans, who recalled how Yuvi had trolled him in April for a similar post. Yuvraj too recalled the moment and couldn’t stop laughing at Shastri’s dig at him. “Hahahahaha senior ! Your a legend on and off the field. Kapil Paaji was a different league altogether,” he said in reply.

Hahahahaha senior ! Your a legend on and off the field 🤪👍👊🏽 Kapil Paaji was a different league altogether

To take you back to where it all started, the country was celebrating the ninth anniversary of MS Dhoni-led Indian team’s 2011 World Cup win on April 2 earlier this year. To mark the occasion, Shastri tweeted and congratulated the entire team on the win but only tagged Sachin Tendulkar and Virat Kohli in his post.

Where It All Started...

Thanks senior ! U can tag me and mahi also we were also part of it 😂

“Many Congratulations Guys! Something you will cherish all your life. Just like we from the 1983 group #WorldCup2011 - @sachin_rt @imVkohli,” Shastri had then tweeted. Yuvraj certainly took offence of the fact that he and Dhoni were ignored and told Shastri that he could have tagged both of them too as they were also part of the victorious team.

“Thanks senior ! U can tag me and mahi also we were also part of it,” Yuvraj had replied taking a cheeky dig at Shastri for ignoring him and captain MS Dhoni in his post. It also started the ‘senior-junior’ banter on Twitter. Both Shastri and Yuvraj have now a square over each other. It remains to be seen if they continue the banter. Maybe they can on September 24, when India celebrates 13th anniversary of the 2007 T20 World Cup win.

(The above story first appeared on LatestLY on Jun 25, 2020 06:48 PM IST. For more news and updates on politics, world, sports, entertainment and lifestyle, log on to our website latestly.com).