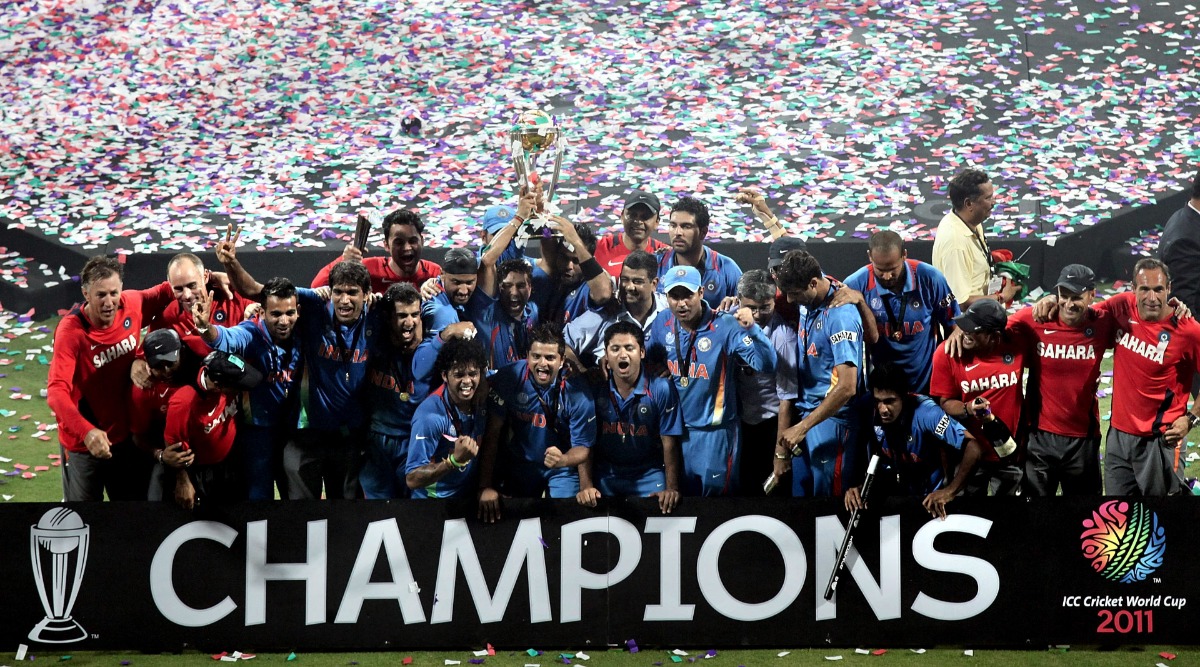 Fans, cricketers and everyone took to social media to congratulate each other as India celebrates the ninth anniversary of its glorious World Cup win at home in 2011. India beat Sri Lanka by six wickets and 10 deliveries to spare in the 2011 Cricket World Cup final to lift their first -- and second overall –title in 28 years. Ravi Shastri, who was on commentary that night on April 2 before being appointed the Indian coach six years later, also took to Twitter to congratulate the players let them know that he – by virtue of winning the 1983 World Cup – shares the triumphant feeling and knows the value of the memory. But Shastri, 57, forgot to tag the main protagonists of that night Yuvraj Singh and MS Dhoni. Mumbai Police Uses Picture of MS Dhoni’s Winning Shot From 2011 World Cup Final to Urge People to Stay Indoors Amid Coronavirus Outbreak.

Yuvraj and Dhoni were at the crease when the latter struck a glorious six over long-on to help India lift the World Cup crown after a hiatus of 28 years. But unfortunately, Shastri ignored, or perhaps forgot to tag them in his tweet. In fact the former Indian all-rounder tagged only Virat Kohli and Sachin Tendulkar in his tweet. “Many Congratulations Guys! Something you will cherish all your life. Just like we from the 1983 group,” Shastri wrote in his tweet tagging only Sachin and Kohli.

Many Congratulations Guys! Something you will cherish all your life. Just like we from the 1983 group #WorldCup2011 - @sachin_rt @imVkohli pic.twitter.com/1CjZMJPHZh

Yuvi was though quick to remind the current head coach of the India national cricket team that there were many others involved in that World Cup-winning team apart from Tendulkar and Kohli. “Thanks senior ! U can tag me and mahi also we were also part of it,” said Yuvraj replying to Shastri congratulatory tweet.

Thanks senior ! U can tag me and mahi also we were also part of it 😂

Yuvraj was declared the Man of the Tournament for his all-round performance throughout the World Cup, while MS Dhoni was announced the Man of the Match in the final for his match-winning knock of 91 from just 79 deliveries. It is to note that Shastri had also not tagged Gautam Gambhir, whose innings of 97 was just as important as Dhoni’s if not more.

Hours earlier, Gambhir himself had also lashed out at a media house for only showcasing Dhoni’s match-winning shot as the one that sent the entire nation into jubilation and brought the World Cup home. “The World Cup was won by entire India, entire Indian team & all support staff. High time you hit your obsession for a SIX,” Gambhir had tweeted.

Meanwhile, India celebrated the ninth anniversary of their last World Cup win. India had beaten Sri Lanka by six wickets – with captain Dhoni hitting the winning runs – to lift the trophy at home. The hosts had fought back from losing two quick wickets to  chase down the 275-run target with 10 deliveries to spare.