This was the end of RCB's promising run in IPL 2021 as they once again failed to win when it mattered the most. As Virat Kohli bid adieu to RCB captaincy, KKR would be happy with their performance, especially with the ball and now set their sights on Delhi Capitals, whom they face in Qualifier 2. 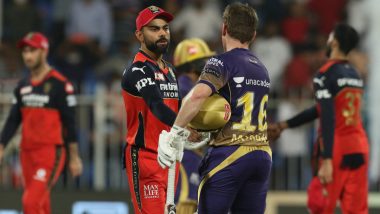 History would read it as 'Virat Kohli in his last dance as RCB captain could not pull off a title win' and probably that would not be wrong either. But this statement hardly throws light on the journey Kohli has had while leading the franchise for 10 whole seasons. A lot of emotions, joy, highs and lows and misses and all off that now comes to an end as Kohli would no longer continue as RCB captain from next season on. They did not win a title, having been really close to doing so in 2016 but this tenure would always be remembered as being one of passion, spirit, energy, enthusiasm and aggression. Eventually, it were the Kolkata Knight Riders who came out winning the Eliminator in IPL 2021 and setting up a date with Delhi Capitals in Qualifier 2 on Wednesday. While the stage was set for Kohli, it was Sunil Narine who stole the spotlight, coming up with a man of the match performance to take KKR home and ahead in Qualifier 2. ‘ Thank You Virat Kohli’ Messages Flood Twitter After 32-Year Old Ends Tenure As RCB Captain With Defeat to KKR in IPL 2021 Eliminator (Check Posts)

They did not have it easy though. The Knights had to dig deep and everytime Bangalore bowled a dot ball or took a wicket, they were somehow able to find a way out of the pressure and eventually, they were home by six wickets, courtesy of some fine hitting by Sunil Narine and clever batting in the end. Bangalore, choosing to bat first, started smoothly and runs kept flowing with skipper Kohli and Devdutt Padikkal at the crease. But KKR tightened the screws with spinner Sunil Narine (4/21) which included the wickets of Kohli (39), AB de Villiers (15) and Glenn Maxwell (15). Also, he sent back KS Bharat for just nine runs as the middle-overs were completely dominated by him alongside Varun Chakaravarthy (0/20) and Shakib Al-Hasan (0/24). RCB vs KKR Highlights of VIVO IPL 2021, Eliminator: Kolkata Knight Riders Script Thrilling Win, To Face Delhi Capitals in Qualifier 2

RCB were unable to break free and though they got a few hits in the end, there was no six in their innings--a testament to the pressure created by KKR.

Kolkata then stumbled early on after a good start but somehow managed to stay in the chase. Bangalore kept chipping away at the wickets with Yuzvendra Chahal (2/16) and Harshal Patel (2/19) making an instant impact. Narine came out, hit three huge sixes off a Daniel Christian over and that put the match in Kolkata's favor. Although KKR almost made a mess out of it, the experience of skipper Morgan and Shakib saw them through by four wickets. Narine was adjudged man of the match for his all-round performance--four wickets and 26 (15). RCB Funny Memes Go Viral As KKR Beat Virat Kohli-led Side in IPL 2021 Eliminator

#Harshal Patel, with 32 scalps, is now the joint-highest wicket-taker in a single edition of the IPL. He has matched Dwayne Bravo's 32 wicket season in IPL 2013. Patel is however the first Indian bowler to take 32 wickets in one season.

#Yuzvendra Chahal has the most number of wickets by a spinner in the UAE leg of IPL 2021 with 14 scalps. Sunil Narine is second with 11 wickets.

#Virat Kohli relinquishes RCB captaincy after 11 seasons where he led in 140 matches, winning 66 of them, lost 70 with one final appearance (in 2016).

#KKR now have six wins in eight matches played in the UAE this IPL season. They were seventh on the points table after winning two and losing five when the India leg of the competition was postponed.

#KKR have now prevented two sides from hitting a six in the first innings in Sharjah in the UAE leg of IPL 2021. The first instance was against Delhi Capitals and now, Royal Challengers Bangalore in the Eliminator--both in Sharjah.

Kolkata knight Riders now head to the Qualifier 2 against Delhi Capitals, who for the first time in the UAE this season, has lost two consecutive matches. Both sides are blessed with game-changing cricketers and it would be interesting to see who catches up with Chennai Super Kings in the final on October 15.

(The above story first appeared on LatestLY on Oct 12, 2021 01:35 AM IST. For more news and updates on politics, world, sports, entertainment and lifestyle, log on to our website latestly.com).