RCB vs PBKS IPL 2022 Dream11 Team: Glenn Maxwell, Jonny Bairstow and Other Key Players You Must Pick in Your Fantasy Playing XI

Both the teams will be eyeing a win to keep their chances of play-off floating. RCB stand strong as of now with their commendable win while PBKS will require extra effort in coming matches to stay in the contest. 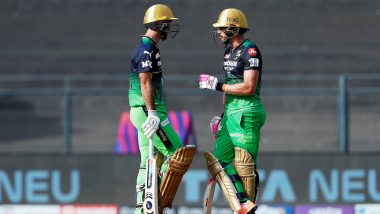 Royal Challengers Bangalore (RCB) will lock the horns with Punjab Kings (PBKS) on 13 May 2022, Friday as both the teams will be eyeing a win to keep their chances of play-off floating. RCB stand strong as of now with their commendable win while PBKS will require extra effort in coming matches to stay in the contest. Meanwhile, we here are some players to pick in your RCB vs PBKS Fantasy Playing XI as the two teams take on each other on Friday. RCB vs PBKS Preview: Likely Playing XIs, Key Battles, Head to Head and Other Things You Need To Know About TATA IPL 2022 Match 60.

The right-handed batter along with skipper Faf du Plessis steadied the innings against Sunrisers Hyderabad (SRH) in their previous match after an early fall of the first wicket. Rajat Patidar added 48 runs of 38 balls in a total score of 192 runs. He will be key for Royal Challengers Bangalore (RCB) as they play a crucial match against Punjab Kings (PBKS) on Friday.

The Australian all-rounder has been tremendous in IPL 2022. Glenn Maxwell contributed 33 runs against Sunrisers Hyderabad to help his team reach a decent total. Later in the game, he also took the wicket of SRH opener Abhishek Sharma on a golden duck. Glenn Maxwell is the power performer for RCB and will be among the players to watch out for as RCB take on PBKS in match number 60 of IPL 2022.

While defending the reasonable total against SRH in their previous match, Wanindu Hasaranga bowled a tremendous spell of four overs, conceded just 18 runs and knocked down half the side of SRH. He has been valuable for RCB in this season and will be among the players to watch out for as RCB face PBKS in their next match.

He pulled on the inning pretty well against Rajasthan Royals (RR) in their previous match and scored a half-century to help his side put up a decent total of 189 runs. He is among the top players for PBKS and will be the player to watch out for in Friday's game of PBKS vs RCB.

He played a bold inning of 38 in 18 balls to end the final overs on a high note and help PBKS build a reasonable total against RR in their previous match. Jitesh Sharma is a valuable asset for PBKS at the middle and is among the players to watch out for when PBKS plays RCB on Friday.

(The above story first appeared on LatestLY on May 13, 2022 12:43 PM IST. For more news and updates on politics, world, sports, entertainment and lifestyle, log on to our website latestly.com).