Royal Challengers Bangalore, already having qualified for the playoffs, would eye a win to ensure a top-two spot while Sunrisers Hyderabad have nothing to play for but pride as they have had a forgettable tournament so far. 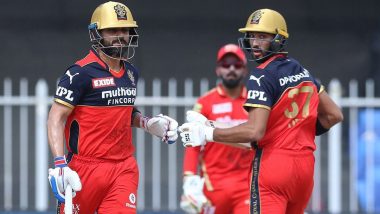 Royal Challengers Bangalore face up against Sunrisers Hyderabad at the Sheikh Zayed Stadium in Abu Dhabi on Wednesday, October 6. The IPL 2021 match would be played at 7:30 pm IST (Indian Standard Time). Royal Challengers Bangalore put on a brave display in their previous match, batting first on a slow surface and ending up beating Punjab Kings to dent their playoff qualification hopes. Virat Kohli's side has already qualified for the playoffs this season and now, he would have his sights set on securing a place in the top-two on the points table.RCB vs SRH, Dream11 Team Prediction IPL 2021: Tips To Pick Best Fantasy Playing XI for Royal Challengers Bangalore vs Sunrisers Hyderabad, Indian Premier League Season 14 Match 52

Sunrisers Hyderabad's campaign, meanwhile, have gone from bad to worse and now, all they can do is to play for pride against their opponents from the 2016 final. Having David Warner sidelined, Jason Roy did play well in his first match for Sunrisers Hyderabad this season but after that, their batting performance has been nothing close to praiseworthy. However, they unearthed a new talent in Umran Malik in the last match against Kolkata Knight Riders and Kane Williamson would want to make more use of the raw pace that the young bowler from Jammu and Kashmir generates. RCB vs SRH Preview: Likely Playing XIs, Key Battles, Head to Head and Other Things You Need To Know About VIVO IPL 2021 Match 52 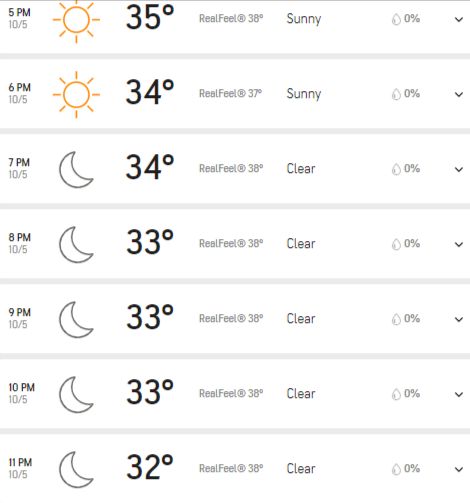 Expected weather in Abu Dhabi at the time of RCB vs SRH clash in IPL 2021 (Source: Accuweather)

The weather seems to be quite favourable for a good game of cricket. Clear skies are expected to be present throughout the match and there does not seem to be any kind of rain interruption. The temperature is set to be between 32-35 degrees celsius for this game. IPL 2021 Points Table Updated

The pitch at the Sheikh Zayed Stadium in Abu Dhabi is a batting-friendly wicket and is equally known to assist spin as well. Someone like Rashid Khan and Yuzvendra Chahal would love to bowl on this surface. Also, this strip is expected to produce another high-scoring match after the blockbuster show between Rajasthan Royals and Chennai Super Kings on Saturday, October 2. A total of around 175-180 would be a competitive one on this pitch.

(The above story first appeared on LatestLY on Oct 05, 2021 03:37 PM IST. For more news and updates on politics, world, sports, entertainment and lifestyle, log on to our website latestly.com).