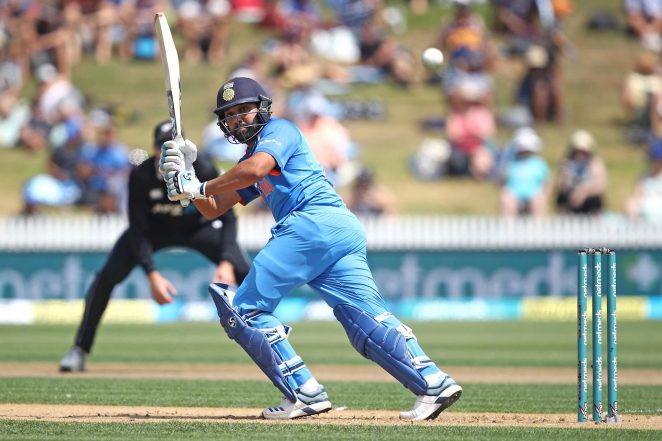 Records were broken in galore by Rohit Sharma as India went on to play New Zealand in the second T20I in Auckland. Not only did he become the leading scorer in the T20Is surpassing Shoaib Malik and Martin Guptill, but also joined Australia’s Michael Clarke and Sarfraz Ahmed to bag an elite captaincy record as India won the second T20I in Auckland. India won the second T20I by seven wickets with seven balls remaining as they chased a total of 158 runs. India vs New Zealand T20 2019: Rohit Sharma Says We Have Learned From Our Mistakes.

Rohit Sharma who couldn’t do much in the first T20I, stepped up to the occasion and scored a half-century from 20 balls. He made a half-century hitting three fours and four sixes. Shikhar Dhawan scored 30 runs and Rishabh Pant remained unbeaten making 40 runs. Winning 12 matches of 14, Sharma has now surpassed Virat Kohli and MS Dhoni who has won 8 games in the same duration. India vs New Zealand 2nd T20 2019: IND Win by 7 Wickets, Level Series 1-1.

Rohit Sharma was elated with the way the Indians played in the game. “Very pleased to see how we bowled, and we were quite clinical with the bat as well. We have quality in our side, but we executed our plans better today, after learning from our mistakes. It's important to understand the mistakes that we made - it's been a long tour for everyone.” The series is now levelled on 1-1 and the Men in Blue will play the decider on Sunday in Hamilton.