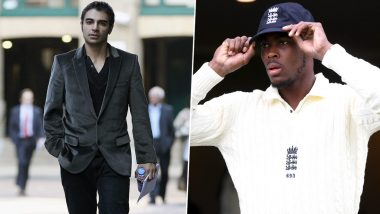 England pacer Jofra Archer faced a lot criticism for breaching team’s bio-secure protocols before the second Test against West Indies. Many prominent members of the cricket fraternity lashed out the pacer’s action and called his irresponsible. Joining the bandwagon, former Pakistan captain Salman Butt took to his YouTube page and slammed Archer for breaking rules. His, remarks, however, didn’t go down well with the social-media users as the southpaw was trolled mercilessly. Fans reminded the former opener of his infamous spot-fixing scandal due to which he faced a five-year ban from playing professional cricket. Jofra Archer Fined and Given Official Warning for Breaking Bio-Secure Protocol, Will Be Available for Third Test.

During Pakistan’s 2010 Tour of England, Butt, along with Mohammad Asif and Mohammad Amir, was found guilty of being involved in spot fixing. Hence, Butt faced the heat of the netizens for questioning Archer’s action. Some called him ‘hypocrite’ while others came up with hilarious memes over Butt’s remarks. Have a look. England Cricket Team Management Must Make Sure Jofra Archer Doesn’t Feel Alone, Says Ben Stokes.

HAHAHAHA HOW DOES @im_SalmanButt OF ALL PEOPLE HAVE THE AUDACITY TO TALK ABOUT LIMITS AND RIGHT & WRONG.@JofraArcher you're allowed to grill him as much as you like. pic.twitter.com/ie7mP4omdP

Salman Butt, you know the man who was sent to prison for cheating, says Jofra Archer 'shouldn't have broken rules'.

That's it. That's the joke pic.twitter.com/BsW33cbfrw

You Know What is the Best Joke ? When Salman Butt said on his YouTube Channel that Rules are Rules & Jofra Archer Should'nt have Broken them. Heheh#2010Terrible 💔

I have no words pic.twitter.com/WyzGxHfkwh

Salman Butt, you know the man who was sent to prison for cheating, says Jofra Archer 'shouldn't have broken rules'.

That's it. That's the joke pic.twitter.com/BsW33cbfrw

Speaking of Archer, the right-arm pacer was fined and dropped from 2nd England vs West Indies Test. He, however, issued an apology to the team management and was recalled for the third and deciding encounter against his own countrymen. However, it will be intresting to see if he’ll feature in the playing XI or not.

The third and final of the series will be played at the Old Trafford Stadium in Manchester and will get underway on Friday (July 24). Some changes are expected in England team as Archer, along with James Anderson, came come in while Dom Bess and Sam Curran might have to make way for them.

(The above story first appeared on LatestLY on Jul 24, 2020 01:53 PM IST. For more news and updates on politics, world, sports, entertainment and lifestyle, log on to our website latestly.com).