India opening batsman Shikhar Dhawan celebrates his 35th birthday on December 5 (Saturday). The Delhi Capitals star has been in terrific form and became the first-ever to score consecutive centuries in the history of the Indian Premier League. He is nicknamed 'Gabbar' in the national team and is a formidable white-ball batsman. 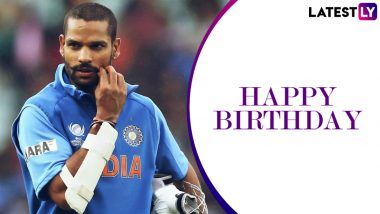 India opening batsman Shikhar Dhawan celebrates his 35th birthday on December 05, 2020 (Saturday). Born in 1985, Dhawan has so far represented India in 34 Test matches, 139 ODIs and 60 Twenty 20 internationals since making his international debut against Australia in October 2010. His ODI and Test debut both came against the same opposition. But while Dhawan made a duck in his ODI debut, he racked up the highest individual score by an Indian batsman on Test debut. Dhawan smashed 187 vs Australia and rewrote the records books. As he celebrates his 35th birthday, take a look at some lesser-known facts about Shikhar Dhawan. KL Rahul, Mayank Agarwal All Smiles in Shikhar Dhawan’s ‘Squad Goal’ Post Ahead of India vs Australia ODI Series 2020.

Dhawan started his cricket journey for Delhi U16s in the 1999 Vijay Merchant Trophy and was the leading run-scorer in the competition two seasons later. Dhawan made his first-class debut for Delhi in 2004. He was India’s highest run-scorer for India at the 2015 ICC World Cup and also at the 2013 and 2017 ICC Champions Trophy. Take a look at some quick facts about him.

Dhawan is currently part of the Indian squad in the tour of Australia and was the third-highest run-scorer for India in the recently concluded ODI series. He will be key to the national side as they aim to clinch the T20I series and conclude their preparations for the upcoming ICC T20I World Cup next year. We wish Shikhar Dhawan a happy birthday.

(The above story first appeared on LatestLY on Dec 05, 2020 12:05 AM IST. For more news and updates on politics, world, sports, entertainment and lifestyle, log on to our website latestly.com).