Shikhar Dhawan Ruled Out of IND vs NZ T20I Series: From Sanju Samson to Prithvi Shaw, Here're 4 Players Who Can Replace the Indian Opener 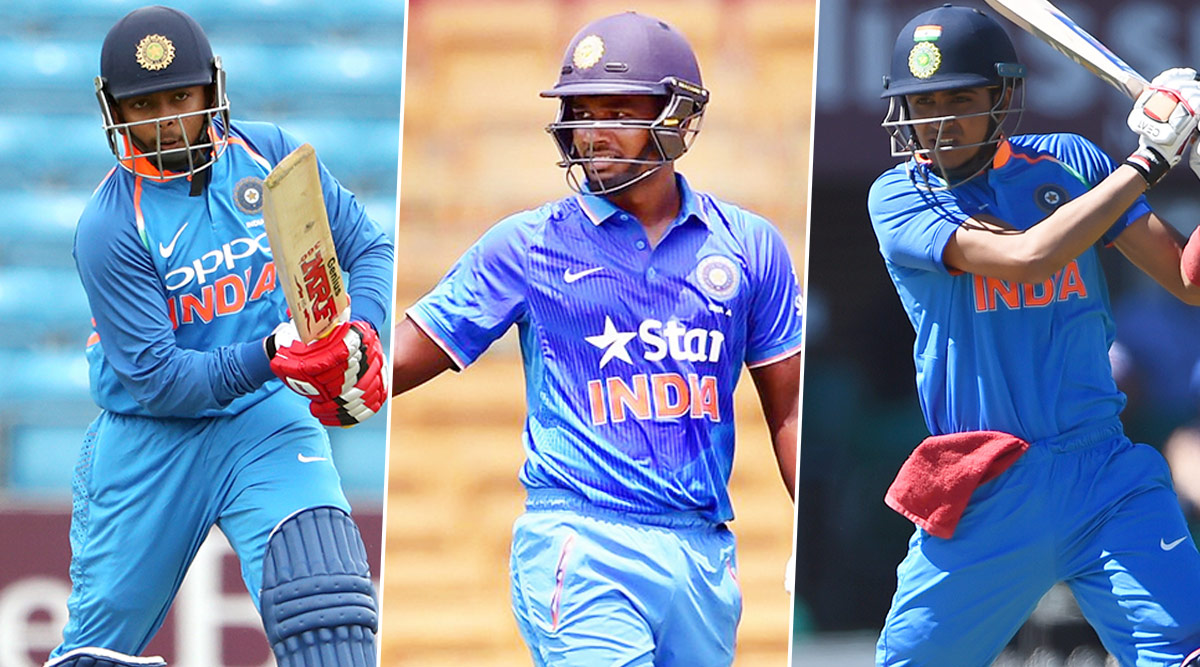 After sustaining a shoulder injury during the 3rd India vs Australia ODI, Shikhar Dhawan has been ruled out of the upcoming India vs New Zealand T20I series. In the fifth over of the Australian innings, the southpaw dived at the cover region to stop the ball going past him. However, he landed awkwardly and was immediately taken off the field. With Dhawan not participating in the upcoming series, the Indian team management must be looking for a formidable replacement for the 34-year old and below, we’ll look at some players who can get a break in the national side. Shikhar Dhawan Ruled Out of New Zealand Tour After Suffering Shoulder Injury Against Australia.

An India A side is also participating in New Zealand and one player from that squad only is likely to get a national call-up. With Dhawan being an opener, the selectors might want to name a like to like replacement. However, KL Rahul has proved his mettle at the top of the order and the management could also look for someone who can contribute with some other attributes. Focusing on the topic, let’s look at some players who can be drafted into the Indian side in place of Dhawan. India vs New Zealand 2020 Schedule in IST, Free PDF Download.

The opener has been in the practice matches against the New Zealand XI and is most likely to get up a maiden call up in the limited-overs side. During a warm-up encounter, the 21-year old scored 150 off mere 100 deliveries and ignoring him will certainly not be easy. His ability to tackle the swinging deliveries and scoring runs at the brisk pace might well come in handy against Tim Southee and Co and the team management must be aware of the fact.

The selectors were highly criticised for dropping Samson after just one game. However, the wicket-keeper batsman could well get another chance in the national side. The right-handed batsman was with the national side for a long time before facing the axe and the selectors might well look back to Samson. The 25-year old also has a plethora of experience behind him and his inclusion might well be on the cards.

The right-handed batsman enjoyed a phenomenal run during the Syed Mushtaq Ali Trophy 2019 and he is also in contention to be picked for the national team. Agarwal has already proved his mettle in the longest format of the game and with his ability to tackle the new ball, the selectors might be tempted to give him a go in the five-match T20I series against New Zealand.

Another player who is in the race for replacing Dhawan in the upcoming series. Almost a year ago, Gill made his ODI debut on the New Zealand soil but wasn’t able to make a significant impact. However, he has enjoyed a great form off late and has piled up a mountain of runs in all formats of the game. Well, it’s quite certain that Gill will play at the highest level and let’s see if he will get an opportunity against the Kiwis or not.

The first of the five-match T20I series will be played on January 24 at the Eden Parks in Auckland. With the ICC T20 World Cup 2020 being less than a year away, the upcoming series is a great chance for both the sides to identify their best combination and build a strong squad for the gala tournament.