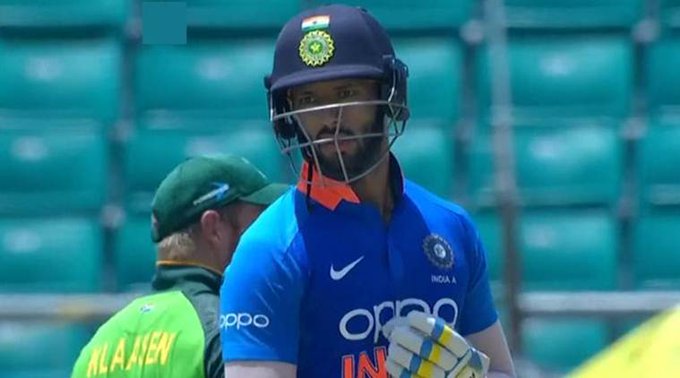 Shivam Dube continued his rich form with the India A team with another whirlwind innings to lead his side to a four-wicket victory against South Africa A. Dube smashed a 28-ball 45 not out, that included two fours and three sixes, to romp his side with 13 balls to spare. The Mumbai born left-hander hit two sixes and a four in three consecutive deliveries to seal India’s victory when 16 runs were needed from as many balls. This was the second time in three ODI matches against South Africa A that Dube guided India to victory from a tricky position and twitter couldn’t hold its breath after seeing the youngster’s performance. India A vs South Africa A: Manish Pandey, Shivam Dube Lead IND ‘A’ to 4-Wicket Win Over Proteas.

Dube had stepped into the crease when Nitish Rana was dismissed with 75 runs still to get from 61 deliveries. The talented 26-year-old first forged a partnership with skipper Manish Pandey before letting loose towards the end. India still needed 32 runs when Pandey was dismissed in the 25th over and soon Dube took charge to see off the strong Protea attack and give India A an inassimilable 3-0 lead in the unofficial ODI series.

Meanwhile RCB: Why Always Me?

Something about RCB Players... They always play well except for RCB...#INDAvSAA

Only if this guy improves his bowling, he can give tough competition to Hardik Pandya for national spot. #INDAvSAA

Take a bow Shivam Dube. Finished off a tight match with 3 consecutive hits to the fence. @im_manishpandey also playing a substantial knock, considering his side was is trouble, having lost 3 quick wickets.

Not If You Watched the First Game

He is Showing His Talent

Shivam Dube is a excellent talent. I have always said this. He needs to be in the team. Better than Vijay Shankar.

He was not given chances at @RCBTweets and now he is showing how good he is with India A. #ShivamDube @RaviShastriOfc

Should Be Considered for World T20

Shivam dube should be considered for the wt20 .

Things Only RCB Can Do...

Only RCB can bench Shivam Dube and Hetmyer 😑

Earlier, in the first ODI game against South Africa A, Dube played a similar innings to not just rescue India A form a tough situation but also help them win. Batting first, India A were struggling at 169/5 in the 28th over when Dube and Axar Patel took charge of the ship. The left-handed duo smashed each and every Protea bowler out of the park to take India A to 327/6 in 47 overs. Dube finished with 79 runs from 60 deliveries, while Patel made 60 from 36 balls. Both also shared a vital 121 runs from just 68 deliveries. India A went on to win the game.