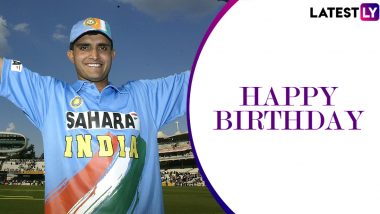 Former Indian captain and current BCCI president Sourav Ganguly turns 48 on Wednesday (July 8) and birthday wishes are pouring in for him from all around the world. The southpaw certainly brought a revolution to the Indian cricket as he took over the reins of the side when the team was reeling with match-fixing controversies. Ganguly was an aggressive leader who never shied away from taking bold decisions and his record as a captain is nothing less than sensational. He was also a force to reckon with the bat in hand as he played numerous magnificent knocks in his illustrious career and guided India to many victories. Sourav Ganguly Birthday Special: Here's a Proof Why Former Indian Skipper Was Called ‘God of Off-Side’ (Watch Videos).

Making his Test debut in 1996, Ganguly didn’t take long in making an impact as he scored a famous century at Lord’s and announced his arrival. Although, he could score runs all over the park. However, it was his ability to hit boundaries in the off-side which loaded fear in the mind of bowlers. In fact, his prowess also earned him the title ‘God of Off-Side.’ Meanwhile, let’s look at how netizens wished the ‘Prince of Kolkata.’

Wish You A Many Many Happy Returns Of The Day @SGanguly99.

One of the most fearless and agressive captain, India has ever had! pic.twitter.com/BbDXacmRAB

Happy birthday dada @SGanguly99 The man who made us believe ❤😊 pic.twitter.com/cS0lg21dYB

The left-handed batsman bid adieu to international cricket in 2008 but not before scoring 7212 and 11363 runs from 113 Test matches and 311 ODIs. Well, his contribution towards Indian cricket wasn’t over as he became the president of Board of Control for Cricket in India (BCCI) in 2019.

(The above story first appeared on LatestLY on Jul 08, 2020 08:51 AM IST. For more news and updates on politics, world, sports, entertainment and lifestyle, log on to our website latestly.com).