South Africa vs England 3rd Test 2019-20: Ben Stokes vs Kagiso Rabada and Other Exciting Mini Battles to Watch Out for in Port Elizabeth 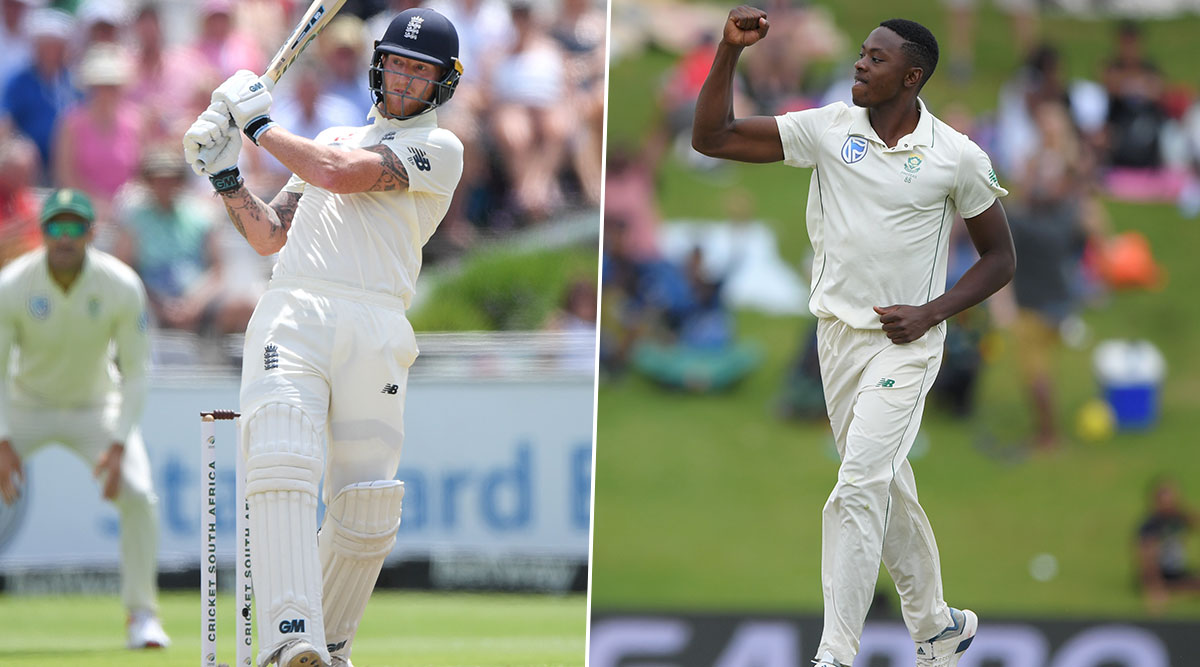 After bagging a 189-run victory against South Africa in the second Test, England must be high on confidence and will seek to register another victory in the third Test. On the other hand, Faf du Plessis’ men will look to rectify their mistakes in order to make a thumping comeback. Nevertheless, the four-match series is perfectly poised at 1-1 and both the sides will like to gain a lead in the upcoming game. The third Test will be played on January 16 at the St George's Park in Port Elizabeth. The crucial game can also witness some individual battles between the players and below, we’ll look at some of them. South Africa vs England, Cricket Score 3rd Test Match.

Riding on Ben Stokes’ stellar all-round performance, England defeated the home side by 189 runs in the previous match and have gained the momentum too. On the other hand, South Africa, who clinched the opening encounter by 107 runs, will look back at their permutation and combination in order to take an unassailable 2-0 lead. The upcoming clash can also witness a great tussle between the willow and the cherry and below, we’ll look at some mini-battles which can enhance the thrill of the upcoming game. South Africa vs England Dream11 Team Prediction.

After bagging the Sir Garfield Sobers Award in the ICC Awards 2019, Stokes must be more pumped up and will eye to extend his dream run. The all-rounder also played a quick-fire 72 in the last match and the hosts must vary him. However, one bowler who could breach Stokes’ defences is Kagiso Rabada. The fourth-ranked Test bowler has not performed as per his standards and will be roaring to leave a mark in the next match.

Broad has bowled some spectacular spells in the ongoing series and challenged the batsmen every time he came to ball. The pacer has been, particularly, brilliant with the new ball and is expected to come good in the next game too. For South Africa, opener Dean Elgar will have to onus to neutralize Anderson’s magic with the new ball and give a great start to his side. He also played a knock of 88 in Cape Town and will eye to cross the three-figure mark this time around.

Arguably the best wicket-keeper batsman in Test cricket at present, De Kock will have a lot on his shoulders in the upcoming game and the southpaw will eye to step-up to the expectations. Having scored two fifties in the series, the 27-year old will look to play another brilliant knock to give his team an upper hand. However, Archer is expected to come back from injury in the third Test and the speedster will certainly eye to trouble the left-handed batsman with his vicious deliveries.

With James Anderson being ruled out with a rib injury, the likes of Archer and Broad will handle the new ball for England. Also, they will also be tempted to bring Jonny Bairstow in the side which means Ollie Pope could face the axe. South Africa, however, are expected to retain the same XI despite their defeat and will seek a different result.