Virat Kohli Will Be Back with a Bang, Says Childhood Coach Rajkumar Sharma

Virat's flop show continued in the fifth Test against England at Edgbaston, where he could manage to score only 31 runs. 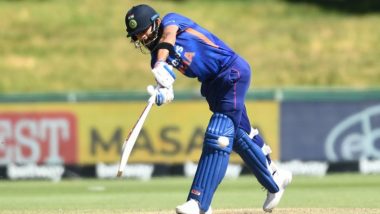 Nainital (Uttarakhand) [India], July 6: After India's star batter Virat Kohli failed to showcase his brilliant performance in the fifth Test against England, his childhood coach Rajkumar Sharma backed him and said that the former skipper will be back with a bang. Virat's flop show continued in the fifth Test against England at Edgbaston, where he could manage to score only 31 runs. Seeing his dismal performance, many fans expressed their anger on the internet and demanded the Board of Control for Cricket in India (BCCI) a break for Virat. Virat Kohli’s Lengthy ‘Lean Patch’ Hurting India, Will Selectors Take a Bold Call?

"See, I understand that he (Virat Kohli) has failed to give a brilliant performance for a long time now but that happens to every good player. The ball on which he lost his wicket in the second innings of the fifth Test against England, was really great and could have dismissed any batter. There is no need to give a break to Virat as he is perfectly fine," Rajkumar Sharma told ANI. "Whatever he has done for Team India till now, no other player has been able to do that. I have full faith in him and he will be back with a bang," he added. After facing a seven-wicket defeat against England in the fifth Test, Team India will square off against the Three Lions in a white-ball series. Following this, the Men in Blue will be going up against West Indies for a three-match ODI series and five-match T20I series. Coming to the fifth Test, a 269-run partnership between Joe Root and Jonny Bairstow helped England create history, with the side completing their highest successful run chase ever in the longest format of the game with a seven-wicket win over India at Edgbaston in Birmingham. Virat Kohli Slammed on Social Media for His ‘Embarrassing’ and ‘Pathetic' On-Field Celebrations Against England.

They were able to successfully chase down the target of 378 runs set by India. This win comes after England was bundled out for 284 in their first innings, trailing by 132 runs after India posted 416 in their first innings. India was bundled out for 245 in the third innings of the match setting a target of 378 for England to win. With this, England has levelled the series 2-2, denying India their first series win on English soil since 2007. They have also completed the most successful run chase at Edgbaston. India has also been handed over their first Test loss while defending a total of 350 or more. India and England will face each other for the three-match T20I series with the first game on Thursday at Southampton.