Hailing from Sydney, Steve Waugh led the mighty Aussie team which ruled World cricket in late 90's and early 2000's. Along with being a potent leader, the star cricketer was a brilliant batsman too and his record in all forms of cricket speaks volumes of his prowess. His rock-solid defence helped him pile up tons of runs in Test cricket. 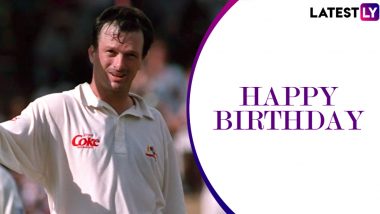 Former Australian captain Steve Waugh celebrates his 55th birthday on Tuesday (June 2, 2020). Hailing from Sydney, Waugh led the mighty Aussie team which ruled World cricket in late 90's and early 2000's. Along with being a potent leader, the star cricketer was a brilliant batsman too and his record in all forms of cricket speaks volumes of his prowess.  His rock-solid defence helped him pile up tons of runs in Test cricket and his tendency to deliver in crunch situations made him a potent ODI batsman too. Also not to forget, Waugh was more than handy with the ball too and his tally of 287 international wickets is not ordinary. Below, we'll look at some of his best Knocks. Steve Waugh Responds to Shane Warne’s ‘Most Selfish Cricketer’ Remark, Says ‘His Comments Are Reflection of Himself.’

Making his debut in December 1985, Waugh didn't take long in cementing his place in the side. After getting the reins of the side, the star batsman inducted ruthlessness in the side and that's where the golden period of Australian cricket started. Under Waugh's leadership, Australia bagged many titles including the 1999 World Cup. He was equally brilliant with the bat during the period. The star player scored 10,927 and 7,569 runs from 168 Test matches and 325 ODIs respectively. As the Aussie legend turns a year older, let's revisit some of his best knocks.

120 Vs South Africa in Leeds

Australia were struggling at 48/3 while chasing 272 Against South Africa in the group stage of 1999 World Cup. The Proteas side was firmly placed on the driver's seat. However, Waugh came to spoil their party. The skipper didn't just bring the Aussie innings back on track but also accumulated run at a brisk pace. He went on to register an unbeaten century as Australia won the game by five wickets.

114 Vs South Africa in Melbourne

Just like the match mentioned above, Australia lost three quick wickets during the 2000 ODI series between the two sides. Nevertheless, Waugh came to his side's rescue and played a captain's knock. After assessing the conditions well in the first half of his innings, Waugh became aggressive later on and scored his third ODI hundred. As a result, Australia posted 295/5 while batting first and later won the game by 94 runs.

A young Steve Waugh proved his mettle in the first match of Ashes 1989 by playing a special knock. On a swinging Leeds track, Waugh looked at his prime and tormented the England bowlers at their own backyard. The youngster brilliantly tackled both spinners and pacers, and brought up his maiden Test ton. Courtesy his brilliance, Australia posted 601/7 while batting first and went on to register a 210-run triumph.

200 Vs West Indies in Kingston

The Caribbean side was bundled out for 265 during the 1st Test of Australia's 1995 Tour and the track seemed bowling friendly. However, things were different when Waugh walked into the ground with his willow. He didn't lose his concentration even after reaching the three-figure mark and brought up a fantastic double century. As a result, the visitors posted 531 runs and won the game by an innings and 53 runs.

150 Vs India in Adelaide

Another Steve Waugh special came during the 1st Test of India's 1999 Tour of Australia. After electing to bat first, the gone side lost three quick wickets. However, Waugh came into bat at five and tables were turned around. The right-handed batsman didn't put a foot wrong throughout the game and his century helped India post 441 runs. India tried to make some sort of comeback but eventually lost the game by 285 runs.

After serving Australian cricket for almost two decades, Waugh bid adieu to the game in 2004 but left a strong Australian side behind him which clinched many memorable triumphs. After retirement, Waugh gave his voice in many games and took up the coach's job too. He even mentored the Australian side which managed to tie Ashes 2019 cricket series.

(The above story first appeared on LatestLY on Jun 02, 2020 07:00 AM IST. For more news and updates on politics, world, sports, entertainment and lifestyle, log on to our website latestly.com).