Supernovas were brilliant in their opening match against Trailblazers as sensational all-round performance saw them win the game by 49 runs. The Harmanpreet Kaur led side will be hoping to replicate that performance. Meanwhile, Velocity skipper Deepit Sharma will hope that her team can kick off the competition with a win. 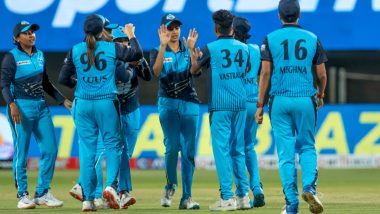 After defeating Trailblazers in the opening game of the season, Supernovas will be looking to continue their winning momentum against Velocity. The clash will be played on May 24, 2022, at 03:30 PM IST.  Led by one of the superstars of Women’s cricket, Harmanpreet Kaur, the team managed an all-round showing in the opener. The Velocity playing their first game of the campaign will be raring to go and get the two points. They are led by Deepti Sharma and although they may not boast of the big names, they remain a decent proposition. The pitch at the MCA Stadium has shown it has something for the bowlers if they stick to the right line and length. Supernovas Register Massive 49-Run Win Over Trailblazers To Kickstart Women’s T20 Challenge 2022.

Harmanpreet Kaur and Harleen Deol and Deandra Dottin scored quickfire thirties as Supernovas managed to get to 163 on the scoreboard. The best part about the team’s performance in the first match was that each player played some positive cricket and showed intent from the onset. Pooja Vastrakar and Sophie Ecclestone shared six out of the nine opposition wickets that fell and were almost unplayable at times.

South African opener Laura Wolvaardt will have a massive role to play in Velocity’s batting and she will be the one looking to play the anchor role. The likes of Yastika Bhatia and KP Navgire need to take the attack to the opposition but it is easier said than done when the opposition has the best bowling line-up.

Those unable to watch the SUP vs VEL match live on television can follow the game online. Disney+ Hotstar will be live streaming the Supernovas vs Velocity match online for its fans in India. Fans, however, need to subscribe to Hotstar by paying a nominal subscription fee. Supernovas are the firm favourites to win the tie but T20 cricket has the tendency to surprise us now and then.

(The above story first appeared on LatestLY on May 24, 2022 01:57 PM IST. For more news and updates on politics, world, sports, entertainment and lifestyle, log on to our website latestly.com).