The Hundred Rules: Playing Conditions and All You Need to Know About ECB’s New Format

This is an entirely new tournament format developed by the ECB and although it can turn out to be exciting, it also is a venture into an uncharted territory. This new competition has a new set of rules and some altercations to existing ones and in this article, we shall explore that. 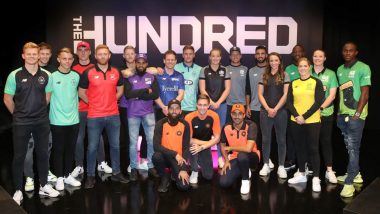 Players and captains of all the men's and women's teams participating in The Hundred (Photo credit: Twitter)

After Tests, ODIs and T20Is, cricket, particularly English cricket is set to usher in a new chapter in the sport entirely new format of the game, called The Hundred. The competition, a brainchild of the England cricket board is all set to start on July 21 with the women's teams competition. The men's competition would begin on July 22. The tournament was created with the idea that a format, shorter than even the T20s would pull in more crowds and attract a new generation to this sport. If this new format turns out to be a success, English cricket would pave an all-new way in the game for the other nations to follow. This new tournament would have eight men's and women's teams from seven cities in England--Manchester, London, Headingley, Birmingham, Cardiff, Southampton and Nottingham. London would have two teams of its own. England vs Pakistan 2021, 2nd T20I Match Result: Jos Buttler, Saqib Mahmood Shine as Hosts Defeat Visitors in Second Game

The Hundred essentially implies that the tournament would be a 100-ball per side affair but it is way more than that. There are some other rules and regulations that are very different from the traditional cricket laws we know about, including the fact that the toss doesn't necessarily have to be done at the ground. There are more and in this article, we shall talk about them. Here they are:

1) Hundred Balls: Essentially, the tournament would be a 100-ball per side affair and the team with most runs at the end would win.

2) No more 'overs': The original concept of having overs in the game has been done away with. Instead, a total of 100 deliveries would be divided into sets of five each.

3) Not more than 10 at a time: A bowler can bowl five and a maximum number of ten deliveries at a stretch. The umpire, after five balls, would either call out 'five' or show a white card to keep track of the number of deliveries a bowler bowls.  Every bowler can not bowl more than 20 balls. This keeps intact the concept of a bowler being allowed to bowl a maximum of one-fifth of deliveries in an innings. The captain of a side can take that call, whether to use a bowler for 10 balls straight or take him out of the attack after five balls.

4) Ends change after 10 balls: Instead of changing ends every over in cricket, ends would only change for batsmen after they have played 10 balls--which can be bowled by one or even two bowlers bowling five balls each.

5) 25-ball powerplay:  Every batting innings would have the first 25 balls to face in their powerplay and two fielders would be allowed outside the 30-yard circle.

6) One timeout: There would be just one timeout, comprising of two and a half minutes in each innings and the bowling side can take this at any point after the first 25 balls.

7) Crossing of batters during dismissal: In regular cricket, we know that a batsman is able to change strikes when they cross each other during a catch. However, in the Hundred, batsmen would not be able to change strikes even if they cross each other during a dismissal. It means that the new batsman coming in would have to strike.

8) Over-rate penalty: If a team is slow on over-rate, then according to the new rule, they would have to bring one player from outside the circle from the point the penalty is incurred.

9) Use of DRS: The DRS, for the very first time, would be available for use in English domestic cricket.

10)  Super Five: In case of a draw between the two competing sides in the group stages, both teams would get a point each. However, in case of a knockout clash, a 'Super Five' would be played just like super overs and the competition would be decided on who scores the most in those limited deliveries. The only difference-only five balls would be bowled. If there's still a draw, then a second 'Super Five' would be played. If there is no winner even at the end of it, the team who had a better position at the end of a group stage would advance.

12) Tactics, anytime: The coach would be allowed to enter the field midway into a match and discuss tactics with his team.

The women's competition in the Hundred begins with a clash between Oval Invincibles and Manchester Originals on July 21, Wednesday. The men's competition would kick off a day later with both these sides starting proceedings.

(The above story first appeared on LatestLY on Jul 20, 2021 08:12 PM IST. For more news and updates on politics, world, sports, entertainment and lifestyle, log on to our website latestly.com).