During India’s fixture against Sri Lanka in 2019 World Cup, which was played on exact this day (July 6), Rohit smashed his fifth hundred in the league and broke Kumar Sangakkara’s record of most centuries in a World Cup edition. 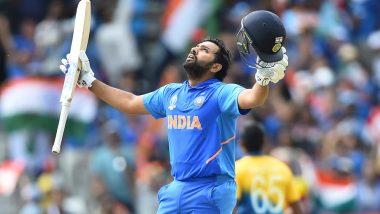 Rohit Sharma enjoyed a sensational run in the ICC Cricket World Cup 2019 and the opener also played a key role in guiding India to the semi-finals. The swashbuckling opener was on a roll throughout the tournaments as he kept piling big runs consistently and also thrashed many records during the process. During India’s fixture against Sri Lanka in the tournament, which was played on exact this day (July 6), Rohit smashed his fifth hundred in the league and broke Kumar Sangakkara’s record of most centuries in a World Cup edition. This Day That Year: Rohit Sharma Scores Magnificent Century As India Defeat Bangladesh by 28 Runs in ICC Cricket World Cup 2019.

During the 2015 World Cup, the Sri Lankan legend scored four centuries and held the record of scoring most centuries in one World Cup. Four years later, however, the Hitman surpassed his tally and that too against Sangakkara’s former team.

Coming to the encounter, India already secured their place in the semi-finals ahead of the game while the Lankans were knocked out. Batting first, Angelo Mathews scored a brilliant hundred and guided the Lankan Lions to 264/7. Jasprit Bumrah was the pick of the Indian bowlers as he took three wickets.

In reply, the Men in Blue got off to a sensational start as openers Rohit Sharma and KL Rahul didn’t put a foot wrong and made a mockery of the Lankan bowlers. With the help of 14 boundaries and two sixes, Rohit brought up another century and rewrote the history books. It was also his third consecutive century in 2019 World Cup. Also, in the list of most centuries in World Cup history, the opener levelled the legendary Sachin Tendulkar at the top with six tons.

Joining the bandwagon with Rohit, Rahul also smashed a ton as India won the game by seven wickets. India were eventually knocked out of the tournament in semi-finals. However, Rohit finished as the leading run-aggregator of the tournament with 648 runs.

(The above story first appeared on LatestLY on Jul 06, 2020 10:52 AM IST. For more news and updates on politics, world, sports, entertainment and lifestyle, log on to our website latestly.com).