The frustrated captain fired salvos such as ‘I'm here to answer your questions, not to fight with you,’ and ‘You tell me the best XI, we’ll play that.’ 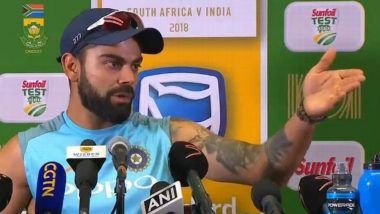 Virat Kohli is unhappy and rightly so. The captain of No. 1 Test side, Indian Cricket Team was the man assigned to register the first Test series victory in South Africa. Instead, he faced back-to-back defeats in Cape Town and Centurion in the three-match Test rubber. While wins and losses are part and parcel of sports, there can be no excuse for behaviour and conduct on a player’s part. Unfortunately, Virat Kohli is guilty on that front.

Kohli showed his temperamental side while fielding questions from journalists during the post-match conference held after losing Centurion Test by 135 runs. The 29-year-old who does not appear to think much before reacting got into an argument with reporters for questing him about the selection of playing XI.

The frustrated captain fired salvos such as ‘I'm here to answer your questions, not to fight with you,’ and ‘You tell me the best XI, we’ll play that.’ Hearing Virat Kohli’s childish responses to legit questions, cricket fans were left wondering what was worse, the 2-0 drubbing in the series or pathetic display media-interaction by the captain of Indian team. This is not the first time when Kohli lost his cool to put on the worst display of his arrogant behaviour.

Cricket world is well aware of Kohli’s habit of mouthing filthiest of words when furious. The star cricketer displayed his pathetic side during 2015 Cricket World Cup held in Australia. This time it was a journalist who became the target of Kohli’s ire. The poor journo’s mistake was an article about his personal life involving his then-girlfriend (now, wife) actress Anushka Sharma. Kohli was not civil in giving an earful to the reporter who was doing his job.

India’s premier batsman is a strong follower of ‘play fire with fire’, hence it came as no surprise to see him get into a controversy playing Australia in Australia. During the 2012 series Down Under, a 23-year-old young Kohli retaliated a group of vile spectators’ abusive comments by sticking out his middle finger at them. The incident took place during a Test match at the Sydney Cricket Ground (SCG). While Kohli defended his actions, cricket experts and fans found the reaction on Kohli’s part as immature.

If you thought Virat Kohli would go easy at his fellow country player, you are wrong. During India’s flagship Twenty20 tournament, Indian Premier League (IPL) Kohli leading Royal Challengers Bangalore (RCB) targeted young batsman, Ishan Kishan playing for Gujarat Lions in 2017 season. Despite being the captain of Indian national side, Kohli did not care before going after an 18-year-old by hurling abuses. Kishan got a sweet revenge by smashing a massive boundary to shut the cocky player.

Virat Kohli is a world-class batsman. His 153 runs in the Centurion Test gave India a chance to level the series. There is no doubt over his cricketing skills. But the player forgets that he is also a captain of the side in all formats of the game. A skipper leads from the front and it is not only restricted to performance on the field but by setting an example with overall leadership skills. It is high time Virat becomes the leader and not just a player.

(The above story first appeared on LatestLY on Jan 18, 2018 02:04 PM IST. For more news and updates on politics, world, sports, entertainment and lifestyle, log on to our website latestly.com).