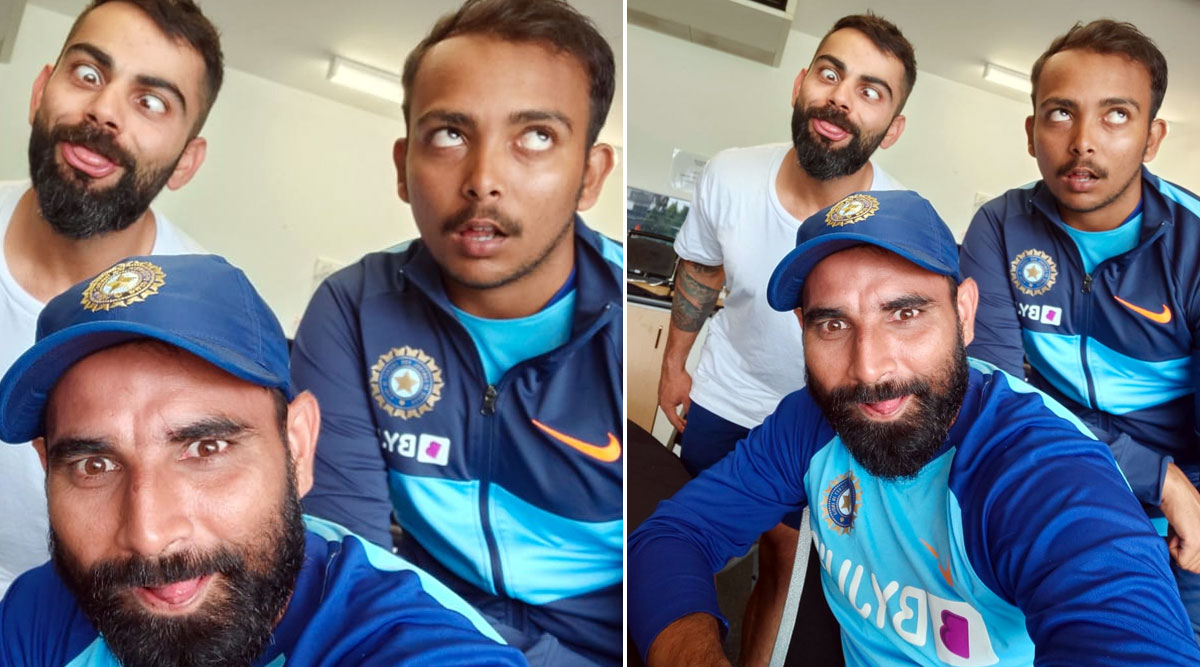 Winning a Test series on New Zealand soil is certainly not easy and the task can stress out any side in the World. However, that doesn't seem to be the case with India and one can see that in Virat Kohli’s latest post on Twitter. The Indian skipper shared a picture with Mohammed Shami and Prithvi Shaw in which all three are trying to copy the crazy-face emoji. Well, the snap is nothing but hilarious and as an Indian cricket fan, you will not want to miss out your stars’ uncanny avatar. Rishabh Pant Scores Quick-Fire Half-Century During IND vs NZ XI Practice Match, Twitterati React.

“Naya post Sundar dost (New Post, Beautiful Friends),” read the caption of the picture shared by the number-one ranked Test and ODI batsman. In the snap, all the three cricketers have made strange faces and the atmosphere of the dressing room can be clearly depicted from the photograph. Well, India had a pretty decent outing in the practice game with both bat and ball, and they will eye to extend their good run in Tests against New Zealand. Meanwhile, let’s look at the rib-tickling snap shared by the Indian skipper.

Coming to the India vs New Zealand XI practice game, Hanuma Vihari, Cheteshwar Pujara shined in the first innings and helped the visitors post 263 runs. In reply, the pace quartet of Mohammed Shami, Navdeep Saini, Jasprit Bumrah and Umesh Yadav breathed fire with the ball and the host were bundled out for 235 runs. The third innings of the match saw quick-fire half-centuries from Mayank Agarwal and Rishabh Pant. The game ended in a draw but India has a lot to take away. The first of the two-match Test series will be played at Basin Reserve in Wellington and will get underway on February 21.