"You'll have to figure out who are the people that are very similar in their bowling skills, and you pick the senior one. I think one guy will be a surprise package going to Australia. Someone who can bowl with pace and has bounce," Kohli said at the post-match presentation ceremony. 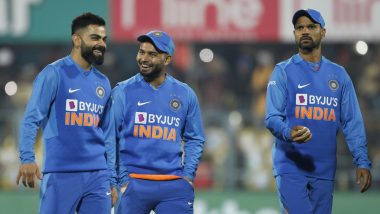 Indore, January 8: India skipper Virat Kohli said on Tuesday that going into the World T20 in Australia later this year, there will be a "surprise package" in the team, one who can bowl with serious pace and gets bounce, giving Navdeep Saini a shot in the arm on a day he excelled for the side as India beat Sri Lanka by seven wickets in the second T20 international here.

"You'll have to figure out who are the people that are very similar in their bowling skills, and you pick the senior one. I think one guy will be a surprise package going to Australia. Someone who can bowl with pace and has bounce," Kohli said at the post-match presentation ceremony. Earlier, all-round India ticked all the boxes on Jasprit Bumrah and Shikhar Dhawan's return to international cricket and swept Sri Lanka aside to take 1-0 lead at the Holkar Stadium. The first match in Guwahati was called off without a ball being bowled due to rain and damp pitch. Virat Kohli and his boys will now look to seal the series in the final match of the series in Pune on Friday. Virat Kohli Becomes Leading Run-Scorer in T20 Internationals, Leaves Rohit Sharma Behind During IND vs SL 2nd T20I in Indore.

Chasing a reasonable 143 for victory, Kohli (30 not out) smashed a six in the 18th over to seal the deal for the rampaging hosts with 15 balls to spare. With the ball, Saini returned superb figures of 2/18. Kohli also picked out Prasidh Krishna as an option due to his pace and the bounce he gets. "Prasidh Krishna has done well in the domestic arena. It is a great luxury to have this group of bowlers in all formats. Looking at the World Cup, we have enough options," Kohli said.

On the lopsided victory, he said, "It was a clinical performance, something we wanted to do as a team. We have gone from strength to strength from the last series. Even though we didn't have Rohit (Sharma), we had a convincing win, which is a very good sign for the team." on Saini, Kohli said: "Navdeep has come into the ODI circuit as well... he is gaining more confidence in T20 cricket. You can really see him letting himself go. When he does that, he can clock those speeds which he did. It's great to see him getting people out with yorkers and bouncers and with pace. It's a really good sign for the team."

Kohli also said that it was pleasing see Bumrah bowl again. "Really pleased to have Jasprit back in the side. He's bowling with pace again," he said. On picking Kuldeep Yadav and Washington Sundar over Ravindra Jadeja and Yuzvendra Chahal, the skipper said: "It was purely based on the number of left-handers they (Sri Lanka) have. Kuldeep takes the ball away, so does Washington. If there are more right-handers, Jadeja and Chahal become more lethal. As a captain, you need more than five bowlers in T20 cricket."

(The above story first appeared on LatestLY on Jan 08, 2020 12:16 AM IST. For more news and updates on politics, world, sports, entertainment and lifestyle, log on to our website latestly.com).