Virat Kohli Suffers Another Defeat At Major ICC Tournament, Should India Consider a Change in Captaincy?

Following the stepping down on MS Dhoni, India’s most successful skipper of all time, the reins were passed to Virat Kohli, a run-machine at the top of his game, beginning with Test cricket in 2014 and limited-overs in 2017. The batsmen from Delhi looked like the ideal replacement, given his abilities with the bat and his impact on a game. 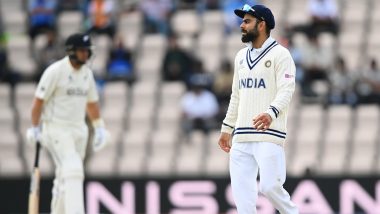 It was a story all too familiar for India on Wednesday (June 23, 2021) when they were defeated by New Zealand in the inaugural World Test Championship final at the Rose Bowl Cricket Stadium. Entering as the favourites, India once again fell short at a major ICC tournament under Virat Kohli, which has raised questions about the Delhi-born cricketer’s ability to win major competitions as India’s 8-year wait for an ICC trophy goes on. New Zealand Lifts WTC Mace With Comfortable Eight-Wicket Win Over India.

Following the stepping down of MS Dhoni, India’s most successful skipper of all time, the torch were passed to Virat Kohli, a run-machine at the top of his game, beginning with Test cricket in 2014 and limited-overs in 2017. The batsmen from Delhi looked like the ideal replacement, given his abilities with the bat and his impact on a game but has since failed to deliver on his potential as a captain at major competitions. India vs New Zealand WTC Final Day 6 Stat Highlights: NZ Win Inaugural World Test Championship.

India have played three ICC tournaments under Virat Kohli’s captaincy – 2017 Champions Trophy,  2019 World Cup, 2021 World Test Championship – but are yet to taste success, failing each time in the knockout stages. Kohli’s side were shocked by Pakistan in 2017 and completely outclassed by New Zealand in 2019 and 2021.

When it comes to successful captains, Virat Kohli is right up there at the top in terms of win percentage. Be it Test (59.01%), ODIs (70.43%) or T20Is (65.11%), the Delhi cricketer holds the advantage over all of his predecessors and betters all of the Indian skipper's records in the longest and 50-over format with only Rohit Sharma having better results than him in T20Is.

However, this success under Virat Kohli hasn’t projected in multilateral series as since the Delhi cricketer took full charge of the team in 2017, India have tasted defeats in all the knockout matches of major tournaments with the exception being the Asia Cup 2018 and Nihidas Trophy 2018 triumphs, which came under Rohit Sharma's leadership.

This lack of success isn’t only limited to international cricket but at the domestic level as well. Despite being the leader of one of the most star-studded teams in Royal Challengers Bangalore for nearly a decade, Virat Kohli has failed to win a single IPL trophy where the likes of Rohit Sharma, MS Dhoni and Gautam Gambhir have won the tournament multiple times.

The is no doubt that Virat Kohli has led the country with passion and determination, taking the team to new heights such as series wins in Australia, South Africa and making them the top-ranked Test team. But the Delhi cricketer has failed to deliver in major tournaments, which indicates that India should consider a change in captaincy to end their drought at major ICC tournaments.

(The above story first appeared on LatestLY on Jun 24, 2021 12:53 PM IST. For more news and updates on politics, world, sports, entertainment and lifestyle, log on to our website latestly.com).