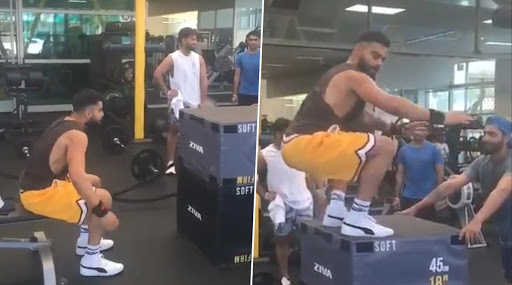 Virat Kohli and Team India are currently on a tour of New Zealand where the two teams are facing each other in a five-match T20I series. Ahead of the third Twenty-20 clash, which will take place on January 29, 2020 (Wednesday) at Seddon Park, the Indian skipper was seen working out in the gym. The 31-year-old is known for being one of the fittest athletes in the game and is not taking things lightly despite his team having a 2-0 lead in the ongoing series. Virat Kohli May Become First Batsman to Score 3000 T20I Runs, Could Achieve Feat In Ongoing IND vs NZ Series.

Virat Kohli shared a video of himself sweating it out in the gym on his social media ahead of the third T20I clash between India and New Zealand. ‘Putting in the work shouldn't be a choice, it should be a requirement to get better.’ The Indian skipper captioned his post. Virat Kohli was joined by fellow team-mates Rishabh Pant and Ravindra Jadeja at the gym as they gear up for the upcoming encounter. The 31-year-old wore a Los Angeles inspired shorts from ‘Earls Collection’ which could possibly be in the honour of late Kobe Bryant who passed away on Sunday (January 26, 2020) in a helicopter crash. Kohli also paid tribute to the NBA legend on social media. Virat Kohli and Rohit Sharma Pay Tribute to Kobe Bryant After NBA Legend’s Untimely Death (See Posts).

Putting in the work shouldn't be a choice, it should be a requirement to get better. #keeppushingyourself

Virat Kohli as always has been brilliant in this series as well. The Indian skipper is on the verge of yet another record as he could become the first batsman to score 3000 T20I runs. He is still 255 runs short of the milestone and could achieve this feat in the upcoming weeks. Team India will be looking to wrap up the series when the meet Kiwis in the third match.