Virat Kohli Will Be Back Among Runs Soon, Believes Rashid Latif

Virat Kohli's poor form with the bat in India's seven-wicket defeat to England in the Edgbaston Test has opened the former captain for more attack on the long run of low scores. 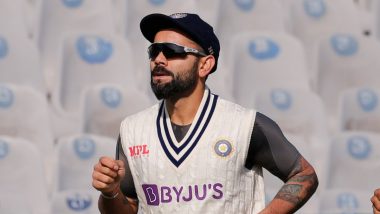 New Delhi, July 7: Virat Kohli's poor form with the bat in India's seven-wicket defeat to England in the Edgbaston Test has opened the former captain for more attack on the long run of low scores. Experts and fans alike had hoped that Kohli would return to form now that he no longer has to carry the burden of captaincy, the 33-year-old batter failed to fire in the Indian Premier League and was rested for India's T20I series against South Africa. Virat Kohli’s Lengthy ‘Lean Patch’ Hurting India, Will Selectors Take a Bold Call?.

Back in the squad in England, Kohli had scores of 11 and 20 in the rescheduled fifth Test against England, resulting in people again questioning his ability to regain his form. However, many former players still believe that Kohli can get back his form soon. Former Pakistan captain Rashid Latif is the latest former star who believes that Kohli will be among runs soon.

"I do believe, he will come back. I have some hopes. World cricket needs him. Because of the way he plays. In this very match at Edgbaston, he went and picked up a fight. Pange lete hai full, kabhi Leach se le liya, kabhi Root se le liya (He has a habit of picking on opponent players, once he did that with Leach, then with Root too). So this is a positive sign that he will surely come back," Latif said on the Youtube channel 'Caught Behind.' Kohli scored his last international century, also his last Test hundred, on November 22, 2019 at Eden Gardens against Bangladesh and the last ODI century on August 14, 2019 at Queen's Park Oval against West Indies. Virat Kohli Slammed on Social Media for His ‘Embarrassing’ and ‘Pathetic' On-Field Celebrations Against England.

One reason for Latif's positive outlook on Kohli was the positive body language of the former India captain during the Edgbaston Test as he supported his bowlers to the hilt. "Because he is a team man and he supports his players well. And the way he supports them, there is hope that he will come back." He added that by the time he retires, Kohli will be counted among greats like Sachin Tendulkar and possibly Sir Don Bradman. "These things happen in every player's life. When he leaves cricket, his name will be on par with Sachin Tendulkar. Who knows it may be on par with 'Sir' Don Bradman," said Latif.

(The above story first appeared on LatestLY on Jul 07, 2022 12:38 PM IST. For more news and updates on politics, world, sports, entertainment and lifestyle, log on to our website latestly.com).