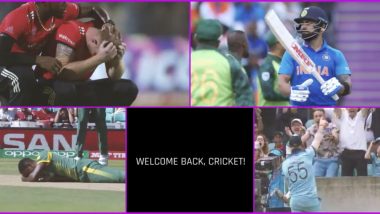 International cricket is all set to resume on July 08 as England and West Indies go head-to-head in the first of the three-match Test series. The match will be the first international cricket game to be played after coronavirus break. Australia vs New Zealand One-Day International (ODI) at Sydney was the last match played before coronavirus resulted in sports activities including cricket around the world. Meanwhile, to welcome cricket back ICC has released an emotional video which features famous commentator and former cricketer Ian Bishop’s voiceover. Ben Stokes vs Jason Holder and Other Exciting Mini Battles to Watch Out for During England vs West Indies Test Series 2020.

The video begins with Carlos Brathwaite’s match-winning six against England in the ICC T20 World Cup 2016 final. The video features clips of many memorable cricket matches, including the 2019 World Cup final between England and New Zealand. Bishop’s powerful voice adds to the appeal of the video. England vs Pakistan 2020 Full Schedule Announced by ECB, Series to Start on August 5; Hosts to Take on Ireland in ODIs As Well.

Following the Test series against West Indies, England will then host Ireland (for ODI series) and Pakistan (Test and T20I series). At the series will be played under bio-secure environment. No spectators will be allowed for the England vs Windies series. Chances are some spectators might be allowed during series’ against Ireland Pakistan, but that depends on the coronavirus situation.

(The above story first appeared on LatestLY on Jul 07, 2020 02:39 PM IST. For more news and updates on politics, world, sports, entertainment and lifestyle, log on to our website latestly.com).