Wriddhiman Saha’s injury was the talk of the town since IPL 2018. 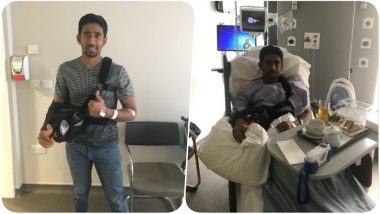 Wriddhiman Saha’s injury was the talk of the town since IPL 2018.  Owing to the same, Saha was not a part of the historic test match between India and Afghanistan. He was then dropped from India’s five-match test series against England. He also missed quite a few matches for Sun Risers Hyderabad. Back then it was said that he had a thumb injury. But later a BCCI official on the condition of anonymity told a news agency that he had a grave shoulder injury.

However, the wicket-keeper batsman has undergone a surgery in Manchester under the supervision of the BCCI. The official page of the board wished him a speedy recovery and posted a couple of pictures of Saha. “Here's wishing @Wriddhipops a speedy recovery. He underwent a laberal repair surgery in Manchester today under the supervision of BCCI Medical Team,” read the caption of the pics.

Here's wishing @Wriddhipops a speedy recovery. He underwent a laberal repair surgery in Manchester today under the supervision of BCCI Medical Team. pic.twitter.com/V4ZCW7DEJV

The official even blamed the National Cricket Academy official and said that it was due to their negligence that the wicket-keeper’s injury aggravated to another level."Wriddhiman's rehabilitation has been a complete goof up. The NCA physio has bungled it big time. Now only a surgery can put him back on track. Once he is done with surgery, he will not touch the bat for at least two months and then rehab will start," PTI had quoted a senior BCCI official in a report last month.  With this, Saha might not be a part of the series in Australia later this year.

(The above story first appeared on LatestLY on Aug 02, 2018 09:05 AM IST. For more news and updates on politics, world, sports, entertainment and lifestyle, log on to our website latestly.com).