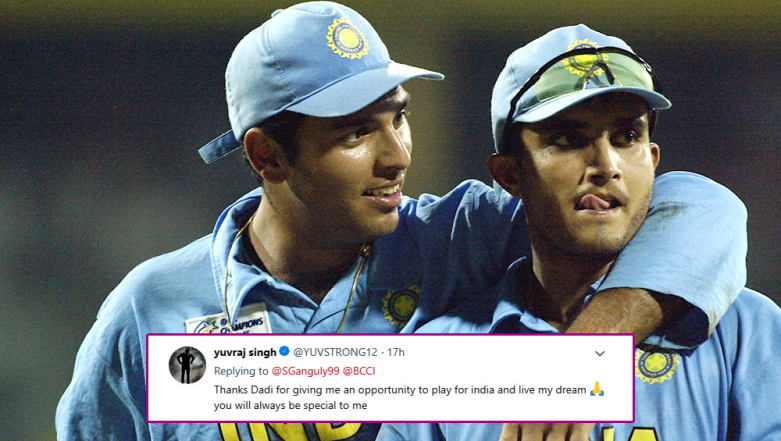 Yuvraj Singh took retirement from all forms of International cricket on June 10, 2019. Yuvraj Singh was a fighter and indeed faced all the hurdles in his life bravely. Yuvraj Singh was last seen in cricketing action while playing for Mumbai Indians in Indian Premier League 2019 tournament. Eminent personalities from Bollywood and Cricket showered love to Yuvi on social media on his retirement. Yuvraj Singh replied former Indian skipper Sourav Ganguly on his tweet as 'Dadi'.  Yuvraj Singh Fans Demand Proper Farewell for Him, Trend #YuviDeservesProperFarewell After Star Cricketer Ends His International Career Abruptly!

Yuvraj Singh was the man behind India's victory in ICC Cricket World Cup 2011, he was also awarded Man of the Series in that tournament. It was after that World Cup where it was found that he is suffering from Lung cancer. After going through chemotherapy treatment in Boston and Indianapolis, he was discharged from the hospital in the year 2012. After getting cured of the tumor, Yuvi made his come back against New Zealand in a T20 match just before T20 World Cup in 2012. Meanwhile, let us have a look at the hilarious reply of Yuvraj Singh on Sourav Ganguly's tweet. Yuvraj Singh to Participate in Khatron Ke Khiladi Season 10 After Retiring from International Cricket?

@YUVSTRONG12 dear Yuv .. every good thing comes to an end .. I tell u this was a marvellous thing..u were like my brother very dear.. and now after u finish even dearer.. the entire country will be proud of u . Love u lots..fantastic career..@bcci

Yuvraj Singh played his last ODI against West Indies on June 30, 2017, while he appeared in his last Test Match in the year 2012 against England. Yuvraj made 8701 runs from 304 ODIs and scalped 111 wickets. While he made 1177 runs from 58 T20Is. Yuvi's six sixes in a row in a single over against England's pacer Stuart Broad in T20 World Cup, 2007 will always be remembered.