Yuvraj Singh Sheds Light On His Decision to Announce Retirement, Says ‘I Was Dragging Myself’ 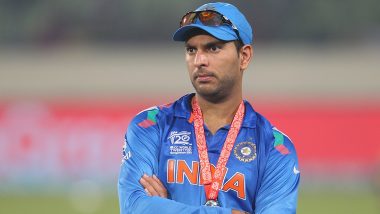 Former India all-rounder Yuvraj Singh might be one of the best cricketers produced by the nation and his records in all forms of cricket are nothing less than sensational. However, the two-time World Cup winner didn’t get a grand farewell as he played his last international match on July 2017 before calling it a day in June 2019. In a recent interaction, the southpaw spilt the beans over his retirement plans. Yuvraj admitted that he certainly misses the game due to his fans. However, he also reckoned that, at one stage, cricket wasn’t helping him ‘mentally’ and he was just dragging himself. Yuvraj Singh Shares Throwback Picture From ‘Days Without Mobile Phones.’

"When you are at a fast pace in life you don't realise a lot of things and suddenly you are like what has happened here and I am sitting here at home for 2-3 months, obviously for different reasons. I have got to a stage when cricket was not helping me mentally, I always wanted to play cricket but it was not helping me in a good state of mind. I was dragging myself and thinking 'when do I have to retire, should I retire, should I not retire, should I play for another season'," recalled the 38-year-old while talking to TV presenter Gaurav Kapur.

Further in the conversation, the left-handed batsman said that he got mental peace when announced his retirement from the game. "I miss the game sometime but more often I do not miss it because I have played for so many years. I get so many messages for fans, so much love that I feel really blessed. More than anything the respect the game has given you, and if you are happy with that respect you have earned for the last 20 years I think it's the right time to move on. So, I think the day I retired I was free, it was a very emotional moment, I can't put that in word but certainly, I feel free after that, mentally very happy. I hadn't slept since many years and I tried to sleep really well," he further opined.

On many occasions after retirement, the legendary cricketer has taken a dig at Indian selectors and team management for not giving him enough chances during his tenure. Even the likes of Suresh Raina and Harbhajan Singh also made similar comments and said that the selection committee should consider the inclusion of veteran players.

(The above story first appeared on LatestLY on Jun 20, 2020 08:30 AM IST. For more news and updates on politics, world, sports, entertainment and lifestyle, log on to our website latestly.com).