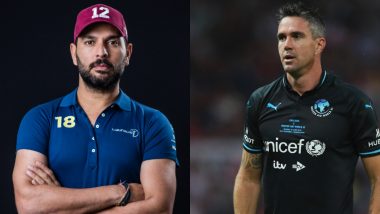 Yuvraj Singh and Kevin Pietersen have been involved in some of the best banter on and off the cricket field. The former India and England cricketers are also close friends and enjoy great camaraderie with each other. Recently, both were involved in another banter that got fans talking, with football season resuming, there have been debated around the game being played without fans in empty stadiums. Now as the Premier League season restarted many were bemoaning over the lack of spectators and crowd support in stadiums. David de Gea Trolled by Netizens for Shabby Goal-Keeping During Tottenham Hotspurs vs Manchester United, EPL 2019-20 (Watch Video).

Pietersen, who supports Premier League club, Chelsea also expressed his disappointment on seeing football matches played in closed stadiums. But Yuvraj was quick to shut former England captain and took a dig at the latter  with a ‘best club in the world’ jibe. Taking to Twitter, Pietersen had written “Football with no fans” and added a sleepy face emoji suggesting that games were boring to watch without spectators. Yuvraj Singh Sheds Light On His Decision to Announce Retirement, Says ‘I Was Dragging Myself’.

Kevin Pietersen on Football Without Fans

Football with no fans - 😴

But Yuvraj, who supports Manchester United, was quick to point out that fans might not be in the stadium but are always behind their favourite teams. The former Indian all-rounder also decided to pull Pietersen’s leg and wrote “Fans on the ground ! Fans at home doesn’t matter bud , we always support the best club in the world.” Yuvraj was referring to Manchester United and even tagged the Twitter account of the Red Devils.

Fans on the ground ! Fans at home doesn’t matter bud , we always support the best club in the world 😉 @ManUtd

His tweet, however certainly didn’t bode well with the fans who asked the former cricketer to take a look at the current position of the club and how they have been struggling for a Champions League berth. Many also trolled the cricketer himself for his post.

Best club IN THE WORLD? pic.twitter.com/jPNAvt1IH0

Best club? Be lucky if you finish in top 4 never mind winning a trophy.

Fans on the ground ! Fans at home doesn’t matter bud , we always support the best club in the world 😉 @ManUtd

Meanwhile, United couldn’t do much than play for a draw against Tottenham Hotspur in their first Premier League match since March 12. Bruno Fernandes’ penalty, after Paul Pogba was fouled by Eric Dier inside the Spurs penalty box, helped United level the scores with 10 minutes remaining having fallen behind to a first-half strike from Steven Bergwinjn.

The draw kept United fifth in the Points table with 46 points after 30 games while Tottenham remained placed eighth four points behind after the same number of matches. Liverpool continue to lead the standings and can seal their first league title in 30 years with two more wins from nine games.

(The above story first appeared on LatestLY on Jun 20, 2020 07:03 PM IST. For more news and updates on politics, world, sports, entertainment and lifestyle, log on to our website latestly.com).