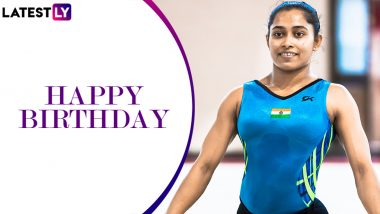 India’s first-ever female Commonwealth Games medallist in gymnastics, Dipa Karmakar celebrates her 27th birthday on August 9, 2020 (Sunday). Karmakar clinched a bronze medal at the 2014 Glasgow Commonwealth Games to become the first Indian woman and only second gymnast from the country to win a medal at the multi-sport event. The bronze medal win first brought her into the limelight and since then, Dipa has only surged high. As she turns 27, take a look at some interesting facts about Dipa Karmakar. ‘Dipa Karmakar: The Small Wonder’ Bags Biography of the Year.

She made a place for herself among the greatest gymnasts with a successful Produnova attempt at the 2016 Olympics and remains the first and only gymnast from the country to win a gold medal at a global event. The legend of her story goes that she was born as a flat feet, an undesirable physical trait in a gymnast as it makes difficult for them to perform well. But Dipa conquered everything to become one of the country’s biggest athlete. Take a look at some lesser-known facts about her. Famous Indian Celebrities’ Birthdays in August: From Kajol to Mahesh Babu to Dipa Karmakar, You Share Your Birthday Month With These Influential Figures.

Karmakar has been training under veteran Bishweshwar Nandi since her childhood and has won numerous laurels under the guidance of the former national gymnast coach. For her contribution to the sport, Dipa Karmakar received the Rajiv Gandhi Khel Ratna Award in 2016 and was also bestowed with the Padma Shri a year later.

(The above story first appeared on LatestLY on Aug 09, 2020 08:00 AM IST. For more news and updates on politics, world, sports, entertainment and lifestyle, log on to our website latestly.com).