Ajax vs Valencia, UEFA Champions League Live Streaming Online: Ajax will host Valencia in a Group H clash in the UEFA Champions League 2019-20. The match will be played at the Johan Cruyff Arena is scheduled to start at 01:30 am on December 11. The previous meeting between the sides ended in Ajax coming away with all three points. 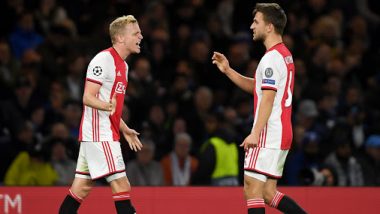 Ajax suffered a shock defeat this weekend by the hand of Willem II in their domestic league and will be looking to bounce back from that result. The Dutch champions are plagued with injuries as most of their players from the starting eleven are out inured. David Neres, Quincy Promes and Andre Onana are the players that will be unavailable for the selection. Valencia’s point against Chelsea could prove to be crucial in the final outcome of the group and has put their qualification fate in their own hands. The Spanish side also has a long list of injuries as they will be without Jasper Cillessen, Goncalo Guedes, Denis Cheryshev and Maxi Gomez.

Ajax vs Valencia Group H match in the 2019-20 Champions League will be played on December 11, 2029 (Wednesday) and will take place at the Johan Cruyff Arena in Amsterdam. AJA vs VAL Group H UCL encounter is scheduled to start at 01:30 am IST (Indian Standard Time).

Where to Get Free Live Streaming Online of Ajax vs Valencia, UEFA Champions League 2019-20 Football Match?

You can also follow the Ajax vs Valencia match on online platforms. Sonyliv, which is the official online media streaming platform of Sony Network, will be live streaming AJA vs VAL Group H encounter of 2019-20 UEFA Champions League matches for its online fans in India. Fans can also follow LatestLY for the live-score updates of Ajax vs Valencia and other UEFA 2019-20 Champions League matches.

Valencia need to beat Ajax or match Chelsea’s result to confirm their place in the knockout stages if the competition. Both teams are plagued with injuries but the Dutch team will start this match as the favourites.

(The above story first appeared on LatestLY on Dec 10, 2019 10:00 PM IST. For more news and updates on politics, world, sports, entertainment and lifestyle, log on to our website latestly.com).