The Catalan giants are placed seventh on the La Liga 2021-22 points table with 32 points, 17 short of leaders Real Madrid. A victory over Alaves can take them to the fifth spot, one short of Atletico Madrid, who are fourth with 36 points. 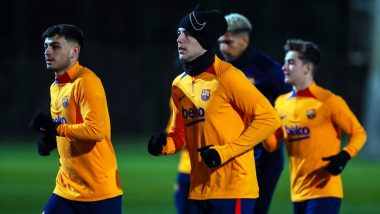 Barcelona players train ahead of their match against Alaves (Photo credit: Twitter)

Barcelona will look to give their top-four ambitions a push when they take on Alaves in an away tie. The Catalonians are seventh in the points table but have not tasted defeat in their last five matches. Xavi has done well to stabilize things at Nou Camp but the glory days of Barcelona still look out of sight. Injuries have plagued their season so far which has not helped and getting knocked out of cup competitions has worsened the mood around the camp. Opponents Alaves are in a relegation scrap and struggling to avoid defeats off late. They will need to start winning games should they get have hopes of climbing out of the bottom three. Alaves versus Barcelona will be streamed on the Voot app from 1:30 am IST. Athletic Club vs Barcelona Result & Goal Video Highlights, Copa Del Rey 2021–22: Barca Out of Spanish Cup

Mamadou Loum is out for Alaves as he is away in AFCON while Ximo Navarro and Ruben Duarte are injured. Edgar Mendez and Joselu will lead the forward line in an attack-minded 4-2-2 formation. Toni Moya and Gonzalo Escalante should man the midfield and Jason and Luis Rioja on the wings have pace and trickery. Goalkeeper Fernando Pacheco should expect a busy day at work with Alaves not having the best of defensive records.

Ansu Fati had a recurrence of a muscle injury and joins Sergi Roberto and Samuel Umtiti on the sidelines.  Action-packed midfielder Gavi is suspended after being sent off against Granada and his place in the team will be taken up by Frenkie de Jong. Sergio Busquets at the center is on top of the game despite all these years at the top of the league. Luuk de Jong has come in handy as the no 9 with injuries to the forward players.

The Alaves vs Barcelona clash in La Liga 2021-22 will be played on January 24, 2022 (Monday) at the Mendizorrotza Stadium in Vitoria-Gasteiz. The match has a scheduled time of 1:30 am IST (Indian Standard Time).

How to Watch Live Telecast of Alaves vs Barcelona, La Liga 2021-22 Football Match?

Viacom18 have acquired the broadcasting rights of La Liga in India for three seasons, so fans can tune into the MTV channel to catch the Alaves vs Barcelona live action on their television sets as they are likely to telecast the game.

Where to Get Free Live Streaming Online of Alaves vs Barcelona, La Liga 2021-22 Football Match?

La Liga 2021-22 will also be available on online platforms for Indian viewers. With Viacom18 being the official broadcasters, fans can tune into the Voot Select app and website to watch the live streaming of the Alaves vs Barcelona clash.

Alaves are struggling at the moment and will go down easily against Barcelona.

(The above story first appeared on LatestLY on Jan 23, 2022 07:15 PM IST. For more news and updates on politics, world, sports, entertainment and lifestyle, log on to our website latestly.com).