Arsenal Lost to Manchester City Because of My Mistakes, Admits David Luiz 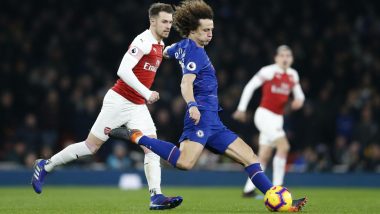 London, June 18: Arsenal central defender David Luiz has accepted his mistake during Arsenal's 0-3 defeat to Manchester City on Wednesday night, saying more than the team's fault, his errors cost them the game.

Luiz made a string of mistakes in a forgettable 25-minute cameo appearance as 10-man Arsenal were thrashed by City on the English Premier League's return post the COVID-19 hiatus.

The Brazilian first failed to clear a ball which Raheem Sterling made the most of and scored the opening goal in the first half added time. Luiz was later sent off for hacking down Riyad Mahrez inside the penalty area four minutes into the second half. Man City 3-0 Arsenal, Premier League 2019-20 Match Result: Raheem Sterling, Kevin De Bruyne Star As Manchester City Past 10-Man Mesut Ozil-Less Gunners.

"It's not the team's fault, it was my fault," he told Sky Sports. "Today I think the team did well, especially with 10 men, the coach is amazing, the players did amazing, it's just my fault.

"I took the decision to play, I should have taken another decision in the last two months, but I didn't. It was all about my contract, whether I stay or not. I have 14 days to be here, and that's it. Today was my fault.

"I don't want to use it as an alibi or an excuse, but it's my fault and that's it.

"I want to stay, the coach knows, he wants me to stay, and we are just waiting for the decisions," said the 33-year old whose contract at Arsenal is set to expire in the coming weeks.

(The above story first appeared on LatestLY on Jun 18, 2020 04:57 PM IST. For more news and updates on politics, world, sports, entertainment and lifestyle, log on to our website latestly.com).