Rabiot is valued by Pirlo who has been impressed by the 25-year-old’s physical and technical abilities. But the club will not stop selling him if the right offer arrives. Barcelona and Man City are both looking to prise the midfielder away from Turin. Barcelona want Rabiot to replace Pjanic at the heart of their midfield. 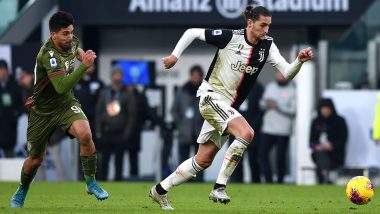 Barcelona and Manchester City are closing monitoring the situation of Adrien Rabiot at Juventus. Rabiot, reports say, is likely to be sold this summer with the Serie A giants looking to offload players in the squad and free up funds for the possible arrival of Paul Pogba from Manchester United and Sassuolo’s Manuel Locatelli. Aaron Ramsey is another player Juventus are looking to offload at the end of this season. Rabiot and Ramsey joined Juventus as free agents from Paris Saint-Germain and Arsenal respectively in 2019 but have failed to nail a place in the Juventus starting XI. Rabiot has been linked with a move to Barcelona, who are looking to sell Miralem Pjanic and make space for the Frenchman in their midfield. Lionel Messi Transfer News Update: Argentine Star Yet To Receive Offer From Barcelona Or Other Clubs.

Rabiot and Ramsey could leave Turin in the summer, said a report from Calciomercato. The pair, who arrived at Juventus as free agents two seasons ago, have failed to earn the trust of coach Andrea Pirlo despite a run of appearances. Both reportedly have an annual salary of 7 million Euros each per season and are already looking for new clubs. Rabiot, in particular, is valued by Pirlo who has been impressed by the 25-year-old’s physical and technical abilities. Isco Transfer News Update: Inter Milan Interested in Bringing Real Madrid Playmaker to San Siro.

There’s nothing between Liverpool and Aaron Ramsey as of today, despite rumours. Former Arsenal midfielder could leave Juventus in the summer - but there are no negotiations or contacts with #LFC board at the moment. 🔴🏴󠁧󠁢󠁷󠁬󠁳󠁿 #Liverpool #transfers

But the club will not stop selling him if the right offer arrives. Barcelona and Man City are both looking to prise the midfielder away from Turin. Barcelona want Rabiot to replace Pjanic at the heart of their midfield while Pep Guardiola’s City are looking for Fernandinho’s replacement. Guardiola has interchanged and played Fernandinho and Rodri as the defensive midfielder this season but with the former ageing, City need an adequate replacement.

Rabiot has been influential for Juventus and has already made 35 appearances. He has scored four goals so far. One of those came in the UEFA Champions League last 16 stage against Porto at home. His goal handed Juventus a 3-2 win at home but they were knocked out of the UCL on away goals.

(The above story first appeared on LatestLY on Mar 26, 2021 01:43 PM IST. For more news and updates on politics, world, sports, entertainment and lifestyle, log on to our website latestly.com).