Barcelona have made Raheem Sterling their top priority in the upcoming winter transfer window. However, the Catalan outfit’s financial difficulties remain persistent and they will be hoping to reach an agreement for a loan deal with Manchester City for the English forward. 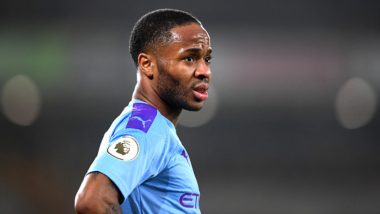 After a difficult start to the season, Barcelona are looking to strengthen their squad in the January transfer window. Ronald Koeman’s team have been underwhelming this season with scoring goals being a major issue for the Catalan giants. In order to address that, Manchester City winger Raheem Sterling has emerged as the top priority for the Spanish outfit, who is also open to a move away from the English champions. Barcelona Made a Mistake by Letting Lionel Messi Leave Club in Summer Transfer Window, Reckons Former President Josep Maria Bartomeu.

According to a report from SPORT, Barcelona have made Raheem Sterling their top priority in the upcoming winter transfer window. However, the Catalan outfit’s financial difficulties remain persistent and they will be hoping to reach an agreement for a loan deal with Manchester City for the English forward.

According to the publication, the club is looking to make two new additions – a physical midfielder and a goal-scoring forward. It is understood that Sterling has been sounded out for the goal-scorer role and will be initially brought into the club on a loan deal with an option to make his mover permanent, which is likely to depend on the future of Ousmane Dembele, who is yet to sign a new deal with Barcelona.

Raheem Sterling recently admitted that he is open to leaving Manchester City and playing in a foreign league if the correct offer arrives. The Englishman has been struggling for regular minutes in Pep Guardiola’s side since the arrival of Jack Grealish but a recent injury to Ferran Torres could see the winger get some more game time.

‘If there was the opportunity to go somewhere else for more game-time I would be open to it. As an English player, all I know is the Premier League and I've always thought, you know, maybe one day I'd love to play abroad to see how I would come up against that challenge,’ the 26-year-old had said in a recent interview.

(The above story first appeared on LatestLY on Oct 21, 2021 06:19 PM IST. For more news and updates on politics, world, sports, entertainment and lifestyle, log on to our website latestly.com).