Barcelona vs Atletico Madrid, La Liga 2019-20: Lionel Messi, Alvaro Morata and Other Players to Watch Out in BAR vs ATL Football Match 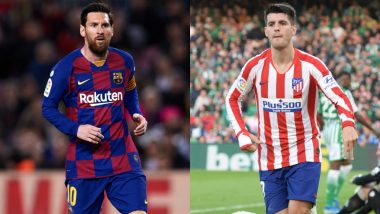 Lionel Messi and Alvaro Morata Will Be Among the Players to watch Out (Photo Credits: Getty Images)

Barcelona will be desperate for a win when they host Atletico Madrid in a title-deciding La Liga 2019-20 fixture on Tuesday. The two-time running league champions are currently two points behind Real Madrid in the points table and with only six matches remaining, the Blaugrana side have to win all and hope Real flounders in one of their matches. Atletico Madrid are already out of the title race and are almost assured of a top-four finish but will search for their first La Liga win against Barcelona since 2010. Barcelona vs Atletico Madrid, La Liga 2019-20: Check Out Predicted Line-Ups For BAR vs ATL at Camp Nou.

A defeat here will not only end Barcelona’s hope for a third straight league title but will also put coach Quique Setien’s job in danger. The former Real Betis coach was reportedly involved in a heated dressing room confrontation with the players after another disappointing draw at Celta Vigo and anything less than a win against Atletico – whose last point at Camp Nou came in 2016 – will certainly kill his chances of remaining at the same club next season. Lionel Messi-Eder Sarabia Rift? Barcelona Manager Quique Setién Douses Tension Rumours in Camp Nou, Says, ‘The Relationship With the Squad Is Good’.

Both teams have fare bit of injury concerns but have strong squads at their disposal. The hosts will miss Frenkie de Jong and Ousmane Dembele is still out while Diego Simeone’s side are without Mario Hermoso and Sime Vrsaljko. Ahead of the Barcelona vs Atletico Madrid, La Liga 2019-20 match, take a look at some key players from both teams.

He started brilliantly with goals in successive matches after the season resumption. But has now gone without one in the last three games, two of which Barcelona have drawn. Messi has, however, not been off touch and his twin assists for Luis Suarez against Celta Vigo, where Barcelona squandered their lead twice to be held to 2-2 draw, were signs that he is in form and only needs some assistance from the other players.

Messi has always enjoyed great matches against Atletico and will hope to lead his side to another win against a familiar foe. In case he finds the net, Messi could also become the seventh player to scored 700 or more career goals.

The former Real Madrid and Juventus man seems to have rediscovered himself at boyhood club Atletico Madrid. Morata has scored nine times in La Liga this season and is also the club’s top goalscorer with 14 strikes across all competitions. He will be crucial against Barcelona especially with Diego Costa struggling with injury.

He has been Barcelona’s best player after Lionel Messi despite arguments over his deteriorating pace, form and increasing age. The Uruguayan, despite his insipid displays in many games, is the third-highest goalscorer in La Liga with 13 strikes in just 22 matches.

He is not far behind in the assists chart either and is only next to Messi in the league assist list having created eight goals this league term. Suarez, who scored both the goals against Celta Vigo, will have to bear the burden of finding the net on a regular basis alongside Messi.

Saul, who has been heavily linked with a transfer away from Wanda Metropolitano next season, has been crucial to Atletico’s midfield this season. Since the restart, he has enjoyed great touch and even scored in the 2-1 win over Alaves in the club’s last league fixture. He has found then net only four times this season but his runs off the ball and defensive credibility will be crucial for Simeone if Atletico are to leave Camp Nou with three points.

(The above story first appeared on LatestLY on Jun 30, 2020 03:48 PM IST. For more news and updates on politics, world, sports, entertainment and lifestyle, log on to our website latestly.com).