Barcelona's Argentine striker Leo Messi and Uruguay's Luis Suarez led Barcelona to a 2-1 victory over Getafe at the Alfonso Perez stadium in Madrid in a La Liga contest. 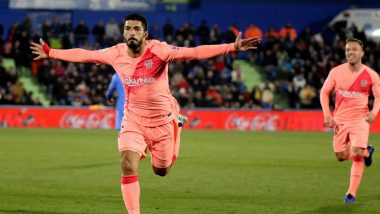 Madrid, January 7: Barcelona's Argentine striker Leo Messi and Uruguay's Luis Suarez led Barcelona to a 2-1 victory over Getafe at the Alfonso Perez stadium in Madrid in a La Liga contest.

Barcelona got on board first, 19 minutes into the match, on a goal by Messi who benefited from crossed wires among the Getafe defenders in taking advantage of a loose ball after a David Soria rejection and crossing the ball into the back of the empty net on Sunday night.

The Catalan squad widened its lead in the 38th minute on a blast by Suarez into the corner of the net from the front of the area, a shot against which the Getafe netminder could not defend, reports Efe news.

Two minutes before the break, Getafe's Jaime Mata scored on a centering pass from the right by Angel. Cristiano Ronaldo's Crotch Is Buffing, Thanks to Constant Touching By Fans! Juventus Player's Statue Erected at Museum in Funchal Catches Attention (View Pics).

In the second half, Getafe had some very clear chances to score the equalizer, including a shot toward the empty net by Mata, while Barca's Messi went up against Soria several times, although the latter managed to stop all the Argentine's attempts.

With the win, Barca remains on top of the standings with 40 points, five ahead of second-place Atletico de Madrid. Getafe, meanwhile, is in seventh place with 25 points, one point behind Betis.

(The above story first appeared on LatestLY on Jan 07, 2019 02:38 PM IST. For more news and updates on politics, world, sports, entertainment and lifestyle, log on to our website latestly.com).