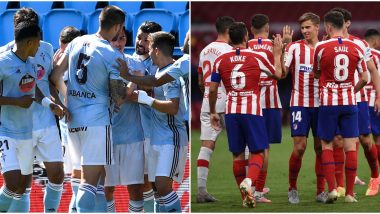 Celta Vigo vs Atletico Madrid, La Liga 2019-20 Live Telecast and Free Live Streaming Online: Atletico Madrid will hope to maintain their seven-match unbeaten run when they visit Celta Vigo for their next La Liga 2019-20 fixture on Tuesday midnight. Diego Simeone’s men have been in fine form ever since returning into action after a three-month coronavirus halt and have won five of the seven matches they played. Atletico, who resumed their La Liga campaign on sixth place, have scored 15 goals and conceded only four, which includes the 2-2 draw against defending league champions Barcelona – one of the only two games they have drawn in their last seven.

Atletico Madrid are placed third in the points table with 62 points, having taken 17 off the possible 21 points in their last seven games. Similarly, Celta Vigo, who resumed La Liga 2019-20 campaign at the second last place, are placed 16th in the standings with 35 points from 34 matches.

They have won two and drawn three, which includes the comeback 2-2 draw against Barcelona, of the seven games they have played since the league resumed last month. Celta Vigo are six points clear of the danger zone and with only four games remaining, Oscar Garcia’s side have probably survived another season in top-flight.

Where to Get Live Telecast of Celta Vigo vs Atletico Madrid, La Liga 2019-20 Football Match?

Fans will not be able to live telecast the Celta Vigo vs Atletico Madrid match live on television as there are no official broadcasters available for La Liga 2019-20 in India.

How to Get Free Live Streaming of Celta Vigo vs Atletico Madrid, La Liga 2019-20 Football Match?

But fans need not worry. They can easily catch the game live on online platforms. The official Facebook page of La Liga will be live streaming the game online for its fans in India.

(The above story first appeared on LatestLY on Jul 07, 2020 09:24 PM IST. For more news and updates on politics, world, sports, entertainment and lifestyle, log on to our website latestly.com).